A system tracking through the Dakotas brought an area of showers and scattered thunderstorms over the Northern Plain States yesterday.. but once again, the bulk of the rainfall was confined south of the border, with precipitation once again bypassing Winnipeg and much of the northern RRV and southeast MB (there were some brief showers over parts of the city last night with 2 or 3 mm, but it appears to have missed the airport) Some areas of southwest MB did pick up some rainfall yesterday, with general amounts of 5-10 mm near the US border and southern RRV, with heavier amounts through the Swan River area into the northern interlake. However, most other areas of southern MB remained dry yesterday.. a growing concern for area farmers who are looking for some much needed rainfall. After a wet start to the growing season in the RRV, the taps starting shutting down in June.. with very little rainfall recorded in July, especially over Winnipeg and the northern RRV. (see above graph showing cumulative precipitation at Winnipeg airport over the past 90 days)

In Winnipeg, only 9.5 mm of rain has been recorded this month. If we get less than 1 mm of rain over the next 4 days, this will go down as Winnipeg's driest July since records began in 1872 (currently July 2006 at 10.5 mm) Will it happen? Things look dry through Friday, but there is chance of some scattered shower or thunderstorm activity Saturday as increasingly warm and more humid air moves into southern MB. At this time of year, it doesn't take much to get more than 1 mm of rain even with some passing showers, so it's not a given that we'll break the record. But given the track record of storms over the past few weeks, the potential is certainly there. Stay tuned..
Posted by rob at 9:33 AM 54 comments:

Another chance of showers and thunderstorms Tuesday into Tuesday night..

A low pressure system developing over Montana is producing scattered thunderstorms over the western Dakotas this evening, and these are expected to continue overnight as warm and unstable air push north. Some of these storms are likely to spread into SW MB overnight with locally heavy rain possible. On Tuesday, these thunderstorms will push eastward and weaken bringing cloud and a few showers to the Red river valley by afternoon. Additional thunderstorms are expected to fire up over SE Saskatchewan and western ND late Tuesday into Tuesday night. Most of the strongest storms are expected to stay in North Dakota where severe storms are possible, but some thunderstorms may track across the border bringing locally heavy rain to portions of the RRV. It remains to be seen if this area of precipitation will get into Winnipeg as models hint the heaviest rainfall may occur south of the city Tuesday. Will Winnipeg miss out again.. or will we finally see our first significant rainfall of the month? Stay tuned..
Posted by rob at 7:28 PM 19 comments:

The rain that was supposed to have spread over the Red River valley this morning has tracked further south.. bypassing much of southern MB and denying us some much need rain. Strong thunderstorms with high winds and heavy rain pushed across North Dakota last night, but very little precipitation made its way across the border with minimal amounts of 2-5 mm recorded along the US border including the southern RRV. There is still a chance of some showers and isolated thunderstorms later today as a trough of low pressure pushes across southern Manitoba later this afternoon, but the band of showers will be narrow and short lived with minor amounts. The lack of rain today will be a disappointment to those who were looking forward to some replenishing of the rapidly depleting soil moisture levels in the region. Only 7 mm of rain has fallen in Winnipeg so far this July, a month which normally sees about 70 mm.
Posted by rob at 10:33 AM 33 comments:

Some much needed rain on the way..

After a week of hot temperatures, and yesterday's dry and windy weather.. things are getting parched in the Red river valley. Winnipeg has seen only 7 mm of rain this month, with many storms bypassing the city to the north, west or south of us. Finally though, it looks like a system moving through North Dakota Saturday will bring a widespread area of rain that should give Winnipeg and the RRV its first significant rainfall in a month. Showers and thunderstorms will develop over southeast SK and the western Dakotas later today into this evening then spread into SW Manitoba overnight. Precipitation is expected to move into Winnipeg and the RRV Saturday morning, with 10-20 mm possible by Saturday night. Embedded thunderstorms may give locally heavier rainfalls of 20-40 mm in some areas. The unsettled weather will move out Saturday night with drier weather by Sunday.
Posted by rob at 8:32 AM 10 comments:

The heat wave which has been affecting southern Manitoba since Saturday is expected to peak today with afternoon temperatures of 35-38C forecast, along with humidex values in the mid 40s. In Winnipeg, highs of 36C are forecast which would be a record for the day (currently 34.4C in 1967), and likely the city's hottest day since Aug 19 2003 when we hit 35.9C. Today should be the hottest day of the heat wave before a cold front pushes through Wednesday bringing some welcome showers and thunderstorms that will likely be accompanied by locally heavy rainfall. Cooler and more comfortable conditions will follow in the wake of the front by Thursday with seasonable temperatures and lower humidity.
Posted by rob at 8:11 AM 79 comments:

The heat is on! Winnipeg hottest spot in country with 34C reading.. Heat wave to continue into early next week.. 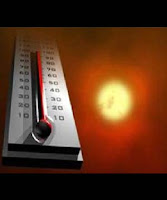 The heat wave has officially started in southern Manitoba with numerous localities hitting 32c or higher today. Hot spot honours went to Winnipeg with an afternoon maximum of 34.1C at YWG airport, and 34.5C at the Forks.. the hottest temperatures in Canada today. Humidex values touched 40C this afternoon as dewpoints rose to 20C in the city.. uncomfortable, but not as oppressive as the 24C dewpoints Winnipeg recorded on June 30th that resulted in peak humidex values of 44c. The hot weather will continue through the weekend into early next week with daytime highs of 32-35c likely through Tuesday. Luckily, humidity values will be somewhat tolerable over the next couple of days as some drier air from northern Manitoba works its way across the Interlake and northern RRV. Dewpoints on Sunday and Monday are forecast to drop into the mid teens in Winnipeg.. quite comfortable compared to the oppressive 22-25c dewpoints being recorded south of the border. By Tuesday however, the higher dewpoints will be spreading back into southern MB with humidex values likely reaching the low to mid 40s across the RRV. Current indications are that a cold front will push across southern MB Wednesday with showers and thunderstorms, followed by cooler and more comfortable conditions later in the week.
Posted by rob at 6:09 PM 61 comments:

It was a chilly Tuesday morning over southern Manitoba with temperatures falling well into the single digits overnight. At Winnipeg airport, temperatures fell to 6C this morning, the coolest temperature of the month so far. Temperatures will warm up nicely today under sunny skies with afternoon highs around 25C. Another chilly night is in store tonight with lows near 10C, but then a significant warming trend is set to develop by mid to late week as a large upper ridge of high pressure builds over the central continent allowing hot air from the United States to flow north. Temperatures over 30C are likely by the weekend into next week along with increasing humidity levels that will likely send humidex values over 40C. There may be some scattered thunderstorm activity as we get into the building heat later this week, but overall hot and humid conditions are expected through the weekend with long range models hinting that the heat wave may continue through the middle of next week. So enjoy those comfortably cool temperatures while they last.. heat and humidity is on the way!
Posted by rob at 7:18 AM 46 comments:

A low pressure trough moving across the Prairies today is forecast to trigger another round of thunderstorms over southern SK and southern MB this afternoon into tonight, with some severe thunderstorms likely in some areas. The best focus for severe storms today will be over southeast SK into SW Manitoba later this afternoon into this evening where large hail and damaging winds will be the main threat with storms that develop, along with the chance of some isolated tornadoes. These storms will likely push eastward into southern MB tonight with a risk of large hail, strong winds, and heavy rainfall as storms move through. Stay tuned on this developing severe weather situation..
Posted by rob at 8:56 AM 15 comments:

A cold front over western MB will interact with a warm and humid airmass over southern MB today to produce scattered thunderstorms this afternoon and evening, a few likely severe especially over the Red River valley and eastern MB into NW Ontario. The main threat with the strongest storms will be golf ball size hail and 100 km/h wind gusts, which were reported with this system yesterday in Saskatchewan. In addition, an isolated tornado cannot be ruled out given the potential for supercells today. Stay tuned on today's severe weather threat..
Posted by rob at 9:37 AM 37 comments: