After 21 years of monitoring weather in Winnipeg, the time has finally come.. Rob's Obs is shutting down and heading to southern Ontario.  I will be taking down my Rob's Obs weather station as of today (July 12 2022) ending 21 years of backyard weather obs from Charleswood.  I will continue to keep my Rob's Obs weather site running as it contains many useful weather links to monitor weather in southern MB, but live weather data from the site will now come from the Gorilla weather station in Whyte Ridge.

After moving to Winnipeg in 1998, I set up my Rob's Obs backyard weather station in 2001, a Davis station set up at my Charleswood home. At the time, there were only 3 personal weather stations online in Winnipeg, giving unofficial weather obs from private sites across the city (now there are dozens). A few years later in 2006, I started this blog giving more in depth weather information to an online community. In 2010, I started my Rob's Obs Twitter account that allowed me to reach more people with weather info. Today, online weather discussion is a commonplace thing, with plenty of social media accounts and sites dedicated to giving the public more in depth weather and climate information that you can get from the daily forecast.

With that, I want to thank everyone out there who has been so supportive and appreciative for the weather information that I've shared over the past 2 decades.  The feedback I've received over the years has been wonderful and gratifying. I started this venture because of my personal interest and passion for weather, but your response and interest gave me the motivation and satisfaction of continuing to do it for this long. Thank you.

On that note, it's time to say goodbye to Winnipeg. I thoroughly enjoyed my 24 years here, and will miss the city and its crazy weather. But I look forward to starting my next chapter of life back in my birthplace of Niagara, Ontario.. enjoying milder winters and friends and family back home.

All the best Winnipeg!

Historic. Crippling. Unprecedented. These are just a few words being used to describe an exceptionally severe early season snowstorm that hammered Winnipeg and much of southern Manitoba from Oct 10-12th 2019. The heavy snow and strong winds caused severe disruption over southern MB with many road closures, flight cancellations, downed trees and power outages. In Winnipeg, 34 cm of snow was recorded during the 2 day storm, making it the biggest October snowstorm in the city since records began in 1872 (previous record October snowstorm was 27.9 cm on Oct 30-31 1971). What made this storm particularly severe was that it occurred before Thanksgiving, while trees still had full leaf coverage. This caused extensive damage to trees and power lines especially in Winnipeg where over 30,000 trees were damaged.  At the storm's peak, over 150,000 people were without power in southern MB, the largest outage in MB Hydro history.

Although snow does occur on occasion before Thanksgiving in Winnipeg, snowfalls are usually less than 5 cm. A snowstorm of this magnitude this early in the season has never occurred in the Winnipeg area before (although they have elsewhere in southern MB).  The heaviest snowfall in Winnipeg before Oct 15th was 18.3 cm on Sep 25 1872 (unsure of accuracy), and more recently 13.8 cm on Oct 7-8 1985 and 10 cm on Oct 9 2009.  Early October snowstorms with heavy snowfall have occurred in southern MB, but mainly have impacted areas west of Winnipeg in the Westman region or to the southeast which have higher elevation. Such examples occurred on Oct 5 2005 when up to 45 cm fell in the Pilot Mound area, and on Oct 6-8 1959 when almost 50 cm fell in Brandon followed by another 35 cm snowfall 2 days later.  More recently, a snowstorm on Oct 4 2012 brought 10-30 cm of snow over the southeast corner of Manitoba.  Note that prior to this storm, the earliest that Winnipeg has had a snowstorm with 30 cm or more of snow was the Nov 7-8 1986 blizzard when 35.8 cm of snow fell.

For a more detailed meteorological analysis of this storm, see this University of Wisconsin link which includes stunning satellite imagery of the event as well as lightning data  (yes, there was lightning associated with this storm along with thundersnow!)

The heaviest snowfall with this storm system occurred over the western Red River valley along the Manitoba escarpment where 50 to 75 cm of snow was reported in the Morden-Winkler, Manitou, Treherne, Holland, Macgregor into Carberry areas. These areas also had the strongest winds which caused severe drifting and extensive damage to thousands of hydro poles and even some transmission towers. In Winnipeg, general snowfall totals ranged from 15 cm in the east end to 35 cm in the west, with Brandon and Dauphin both recording 30 cm. Little or no snow fell towards Swan River and north while mostly rain was recorded east of Steinbach.

Some of the highest snowfall reports included:

A report of 90 cm of total snowfall was reported at a CoCoRaHS site south of Morden near the North Dakota border.   Another CoCoRaHS site at Somerset reported a total of 87 mm of melted precipitation over the storm. Using a 7.5-8:1 snow:liquid ratio for the area would result in an estimated snowfall of 65-70 cm.   (Check out this video clip near Boissevain MB showing how bad conditions were in SW Manitoba during the height of the storm on Friday Oct 11.)


At my location in Charleswood in the west end of Winnipeg, snow began falling early Thursday morning (Oct 10th) as a cold drizzle overnight changed to wet snow by 6 am. The snow intensified during the morning commute with about 5-8 cm falling by 11 am. Amazingly the precipitation was still falling as rain in the eastern suburbs of Winnipeg with little or no snow accumulating in those areas much of the day as the rain/snow line split the city. By 5 pm Thursday, 13 cm of snow had fallen at my location with snow continuing through the evening. Snow became lighter overnight with an additional 8 cm by 8 am Friday (Oct 11), for a storm total of 21 cm by that point. Friday morning saw a brief break in the snow before redeveloping by late morning mixed at times with ice pellets as the main Colorado low system moved into northern Minnesota. The powerful storm system also brought strong winds to Winnipeg and the RRV Friday with north winds gusting to 80 km/h in Winnipeg, and up to 100 km/h over the MB lakes and western RRV. Snow persisted Friday afternoon with another 8 cm by 5 pm (29 cm storm total).  Snow continued Friday night before finally tapering off in Winnipeg overnight as the main area of snow pushed north and west. By 8 am Saturday (Oct 12), another 5 cm of snow had fallen at my location, for a storm total of 34.0 cm. Total melted water equivalent of the snowfall was around 55 mm, making for a very heavy wet snow (about a 6:1 snow:liquid ratio)


Time lapse video of storm in Winnipeg from webcam in Riverview, just south of downtown

The combination of heavy wet snow and strong winds was too much for power lines and trees, causing considerable damage across southern MB. Power outages were widespread as tree branches came in contact with power lines causing power flashes and tripping power lines. An exceptionally wet September in southern MB had allowed trees to maintain greater foliage coverage into the second week of October, maximizing the potential for tree damage. Further west, the snow and wind caused many hydro poles to fall, with even some main transmission towers damaged outside Portage La Prairie.  Thousands were left without power, including much of the city of Portage La Prairie.  The province of Manitoba declared a state of emergency allowing for additional resources to help MB Hydro restore power to the worst affected areas.

The following is a storm summary statement from Environment Canada:

NOTE: Although I'm no longer updating this blog, this powerful storm system that impacted Winnipeg and much of southern MB was too significant and noteworthy not to highlight. It's important to chronicle and archive these extreme weather events so we have a record of what happened for future reference and to put them into historical perspective.
Posted by rob at 8:23 PM 1 comment:

Blog no longer being updated

Please note that I am no longer updating this blog.

For weather updates and details, please follow me on Twitter at @robsobs. Thanks!
Posted by rob at 9:19 PM No comments: 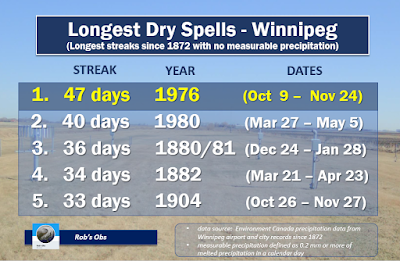