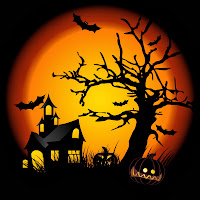 The weather is not looking too frightful this year for Halloween in southern Manitoba. Pleasant conditions are expected with afternoon highs slightly above normal at +8C under partly sunny skies and light winds. Temperatures are expected to be near +5C around 6 pm falling to 0C by midnight for evening trick or treaters. Last year, Winnipeg had a high of +5C on Halloween, with patchy drizzle in the evening and temperatures near +2C.  Overall, the weather is not looking too bad for this time of year, which history has shown can range from pleasant to downright terrifying in Winnipeg on Halloween. Some of the more significant Halloween weather Winnipeg and area has experienced since 1950 includes..

1955.. A steady snow starts around midday Halloween and continues through the evening. 9 cm of snow accumulates by midnight with evening temperatures near -2C. This snowfall would signal the start of Winnipeg's snowiest winter on record, with a phenomenal 252 cm of snow falling by April, over twice a normal winter snowfall.

1979... Winnipeg's scariest Halloween.. weatherwise. Rain and wet snow during the afternoon changes to steady snow in the evening, accompanied by northerly winds of 50 km/h gusting as high as 78 km/h and temperatures near the 0C mark. Although only 2 cm of wet snow fell in Winnipeg, heavier amounts of 15-25 cm fell east of the city to the Ontario border. Winnipeg police reported it was one of the quietest Halloweens they ever had due to the poor weather keeping many home. Twas a night fit for neither man nor beast.

1991 ... One year later, it was one of the coldest Halloweens on record with a high of -7.5C and a low of -15.3C in Winnipeg, along with 4 cm of snow on the ground. Temperatures ranged between -8C and -10C Halloween evening, but winds were light so windchill was not a big issue.  Further south, Minnesota was being clobbered by a massive early season blizzard that dumped over 36" of snow in Duluth and 28" of snow in Minneapolis.

1999 ... Warmest Halloween in modern times. Temperatures climb to a high of 17.7C in Winnipeg, while the mercury soars to 24C over the southern Red River valley at Emerson and Gretna. Temperatures were still at a balmy 16C Halloween evening in Winnipeg making it feel more like the end of September than October.

2000 .. A soggy Halloween. 11.6 mm of rain falls during one of Winnipeg's wettest Halloweens. At least it was mild with highs near 13C but also fog and mist to add to the spooky atmosphere.

Whatever the weather, have a safe and enjoyable Halloween!
Posted by rob at 6:00 PM 22 comments:

A clipper system over Saskatchewan today will track into North Dakota tonight bringing the first accumulating snow of the season to parts of SW Manitoba and North Dakota. The precipitation is expected to push into SW Manitoba later today into this evening, possibly starting as rain before changing to all snow tonight. About 2-5 cm of snow is expected along a path from the Roblin/Riding Mtn Park area through Brandon into the Pilot Mound/Turtle Mtn area into North Dakota. Locally higher amounts are possible over higher elevations. The system will track into North Dakota Sunday and will signal a pattern change to colder than normal weather over southern MB for the balance of the week, likely persisting through the rest of the month. Occasional snowshowers are likely Sunday across southern MB, including Winnipeg, with localized heavier snowbands possible to the south of lakes Winnipeg and Manitoba.  Ready or not folks.. colder weather is on the way!
Posted by rob at 12:00 PM 27 comments:

Pleasant fall weather will continue over southern MB over the next couple of days as an upper ridge crosses Manitoba maintaining dry and warmer than normal conditions. Temperatures will climb to the 20C mark Tuesday with partly sunny skies and light breezes.  Temperatures will remain above normal in the mid to upper teens through Thursday before the next threat of rain by Friday as a Colorado low storm system tracks into southern MB. At this point, it appears that the bulk of heaviest rain with this system will be over western MB and along the SK border where 25 to 50 mm is possible Friday into early Saturday.
Posted by rob at 6:32 PM 27 comments: