A history of weather observing in Winnipeg

It's a question that people ask routinely.. what is the temperature outside? And although you can get a reasonable answer from a variety of sources these days from car thermometers to billboard displays, the official answer always defaults to the temperature reading at Winnipeg airport's weather station, the official source of weather observations from Environment Canada. Weather observations started at Winnipeg airport (YWG) in March 1938, and have been a daily ritual ever since, measuring all aspects of Winnipeg weather including temperature, precipitation, wind, pressure, humidity, and virtually anything else that Mother Nature has thrown at us.

Official weather observations in Winnipeg actually began many years before Winnipeg airport was even around. In 1871, the Canadian federal government established the Meteorological Service of Canada, mainly as a warning service for mariners. To help track and forecast the weather, the department set up weather stations across the country to report on local weather conditions. One of these early stations was established in Winnipeg, first manned by James Stewart, who started preliminary observations around 1870, possibly near Main St and St Mary Ave where he operated a drug store.  A November 1872 newspaper article mentions the appointment of James Stewart as the official weather observer for the Winnipeg meteorological station for the Meteorological service of Canada.


Although Stewart began weather observations in 1870, continuous archived data is not available until March 1 1872 when official weather records began for Winnipeg.  By 1873, the weather observing station was formally established at St John's College on Main St between Church Street and Anderson, near the present day St John's Anglican cathedral (see 1911 city map above showing location of St John's College) An August 1874 newspaper article details news of upgrades to St John's College including upgrades to the meteorological observatory (see image below). The article mentions the addition of a self-registering anemometer on a newly built tower at the College, which suggests that more detailed wind data for Winnipeg (including peak gusts) was available from the St John's College site as early as 1873. 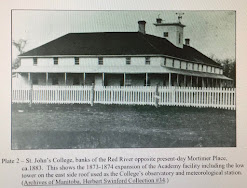 ST JOHN'S COLLEGE METEOROLOGICAL OBSERVATORY - CA 1883
This photo shows the building on the St John's College campus that housed the meteorological observatory, including wind instruments (see tower on roof), ca 1883. Daily weather observations were taken from this location from 1873 to 1932, and sent by telegraph to Toronto and Washington DC to compose weather charts and bulletins.

From 1872 to 1888, James Stewart was the official weather observer for Winnipeg sending daily weather observations to the meteorological service headquarters in Toronto. (Suffering from rheumatism, Stewart moved to Prince Albert SK in 1890 where he died in January 1911). It should be noted that the name of William R. Flett also appeared on weather observation forms in the 1870s which indicates James Stewart was not the sole weather observer during this time. Daily weather observations would continue at the St John's College site on Main St until April 1 1932 when the station was moved to the Manitoba Agricultural College at the University of Manitoba campus in the south end of the city in Fort Garry. Readings would continue at the university site (still considered part of the St John's climate record) until the newly formed Winnipeg airport took over weather observing duties as of March 1 1938.
The observations from St John's College are recognized as official climate records for Winnipeg, and are included in a merged climate database with Winnipeg airport that extends the city's weather record database to 150 years as of March 1 2021, one of the longest continuous weather observing programs in Canada. A look at the original weather record forms from St John's College reveals detailed observations on the daily weather in Winnipeg using official meteorological instruments of the time, with accurate measurements of temperature, precipitation, wind, pressure, sunshine, etc. The records often included remarks on severe storms and celestial phenomena as well as observations on flora and fauna and river conditions. Overall, the records give a fascinating insight into weather conditions in Winnipeg in the late 1800s and early 1900s that expand the climate record another 65 years beyond the airport observation record. Unfortunately, other than temperature and precipitation data, much of this meteorological data has not been digitally processed and is not available in the online Canadian climate archives. St John's College climate database holds the distinction of having both the hottest and coldest temperatures ever officially recorded in Winnipeg... 42.2C (108F) on July 11 1936, and -47.8C (-54F) on Dec 24 1879. (Click here for historical weather data at St Johns' College between 1872 and 1938.) 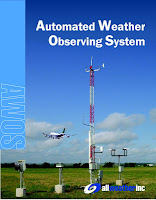 In July 2008, weather observations for YWG airport switched to an automated system as modern technology and tightening resources necessitated a change in the human observing program. Most of the weather data is now collected automatically from an Automated Weather Observing System, or AWOS for short. A human observer still inputs the data manually including precipitation start and end times, but for the most part, much of the weather observation is taken automatically by the AWOS. An important note here is that snowfall data (including snow depth) stopped in 2008 since AWOS is not able to measure snowfall accurately, and human observers were not required to take snowfall measurements manually.  Instead, the AWOS measures only melted snow, ie. the water equivalent of snow that falls. Thus, snowfall data for Winnipeg, which had been taken since 1872, was no longer being observed after 135 years of continuous observations. Snowfall data for Winnipeg is now observed at a nearby volunteer climate station, Winnipeg Charleswood 2, that still takes official snowfall observations for Environment Canada.
JANUARY 2013 - A change in airport weather observing duties: NavCanada era


On January 17 2013, the automated weather observations at Winnipeg airport were switched to a new AWOS station operated by NavCanada, the agency responsible for aviation services in Canada. This marked the first time that weather observations for Winnipeg airport were not the responsibility of the Meteorological Service of Canada, but a third party. This new weather observing station, known as an HWOS (Human Weather Observation System) relies on automated observations from the weather station, but still requires a human observer from NavCanada to input the full observation (like the previous AWOS setup)  Environment Canada has little control over weather data collected at these NavCanada sites. (Note: Hourly weather information for Winnipeg as displayed on Weatheroffice's "current conditions" page comes from this NavCanada HWOS site).

To maintain control of weather data at the Winnipeg airport, Environment Canada has a co-located automated weather station at the airport known as Winnipeg A CS (CXWG).  This is a fully automated weather station with no human input for its observations. XWG began its observing program in October 1996. As of October 2013, all official daily highs, lows and precip data for Winnipeg airport come from this site.

In summary, here are the list of official Winnipeg observing stations since 1872: 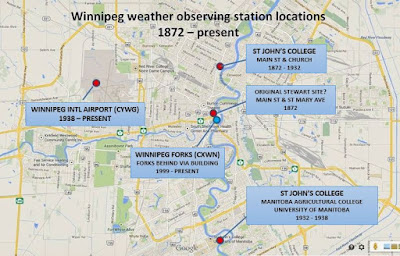 Other observing notes:
- In September 1938, the wind anemometer at the Winnipeg airport site was mounted on top of a hangar at a height of 20 metres (63 feet), twice the height of the internationally accepted standard of 10 m (33 feet) As a result, wind speeds from the Stevenson airport were somewhat higher than official standards from 1938 until Dec 1 1963, when the anemometer was lowered to the official 10 metre height at the new Winnipeg International airport.
- Water equivalent for snowfall readings began on Nov 1 1960. Before then, water equivalent of snowfall was simply calculated by dividing the snowfall amount by 10 (i.e: 5 inches of snow = 0.50 inches of melted precipitation)
- On July 1 1961, the meteorological day was changed to the synoptic day ending at 06 UTC for precipitation measurements.  This correlates to midnight during standard time (Nov - Mar), and 1 am during daylight savings time (Mar - Nov)  Prior to July 1 1961, the meteorological day for precipitation measurements was considered the 24 hr period from 630 am to 630 am of the previous day
- On Jan 1 1977, temperature and precipitation values for Winnipeg climate data began using metric standards (i.e., temperatures in degrees Celcius (0.1C resolution), rainfall in mm (0.2 mm resolution), and snowfall in cm (0.2 cm resolution) Prior to that date, temperature and precipitation values for Winnipeg were taken using imperial measurements (i.e., temperatures in whole degrees F, precipitation in inches)
In addition to the airport station, Environment Canada also has an automated station downtown at The Forks (CXWN) which began operation in November 1999. This station has maintained the same automated observation program since inception.
Although equipment and reporting procedures have changed, Winnipeg residents can be rest assured that weather observations continue at Winnipeg airport maintaining a legacy of weather observing in this city that has spanned 150 years.