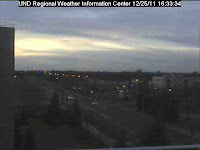 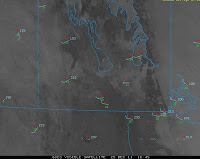 Satellite photos (left) show the minimal snow cover extent across southern MB and North Dakota, with little snow evident over the southern and western Red River valley and North Dakota and Minnesota.. which normally would be covered in white by this time of year. Click here for an explanation on this winter's slow start. Whether it was brown, white or green.. here's hoping everyone had a happy and healthy Christmas! All the best in 2012!
Posted by rob at 4:32 PM