2009 growing season ends for most of southern Manitoba 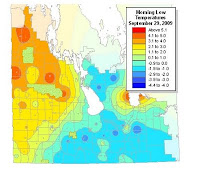 Clear skies and a light wind allowed temperatures to drop to below freezing this morning across much of southern MB, officially ending the 2009 growing season. The exception was near Lake Winnipeg and western MB where clouds kept temperatures above freezing overnight (see map) At Winnipeg airport, the temperature dropped to a low of -2.4C, ending a 114 day growing season that began late due to a record freeze on June 6th.

At Winnipeg airport, the average date of the first fall frost is Sept 22nd so today's frost was a week later than "normal", although the first fall frost date varies quite a bit from year to year. Average date for the last frost in spring is May 23rd which gives an average growing season of about 121 days using airport data. Last year, the airport had a 116 day growing season (Jun 3rd - Sept 26th), virtually the same as this year.

Within the city of Winnipeg however, frost was not widespread this morning. The Forks downtown had a low of +1.4C, and in Charleswood, my station registered a low of +0.5C with just some some light frost noted. Downtown Winnipeg has a much longer growing season than the airport, due to the urban heat island effect that keeps night time temperatures warmer than rural areas. The average first fall frost downtown is Oct 5th, while the last spring frost is May 4th giving an average growing season of 159 days downtown, or 38 days longer than the airport. For most areas of the city, the length of the growing season lies somewhere between downtown and airport values.
Posted by rob at 5:13 PM