A mild October.. will mild pattern continue through November?

October 2015 was another mild month over the Prairies with temperatures averaging some 2-3C above normal over western and central Canada. In Winnipeg, the month finished with an average temperature of +7.1c, or 2.1C above the normal October average of +5.0C (30 year average). The mild weather comes on the heels of a warm September that finished 3C above normal, and was Winnipeg's 6th warmest September since 1872. The combined Sep-Oct average temperature of 11.5C made it Winnipeg's 9th warmest such period since 1872. (30 year average is +8.9C)

Note that Winnipeg had its second warmest winter on record in 1997-98, thanks to the unusually strong El Nino that year. That winter saw very little snow through December, with only a trace of snow on the ground in Winnipeg on Christmas day. The winter finished with an average temperature of -8.2C, a whopping 6C above normal, and the second warmest winter on record in Winnipeg, second only to that of the incredibly mild winter of 1877-78 (another very strong El Nino year) 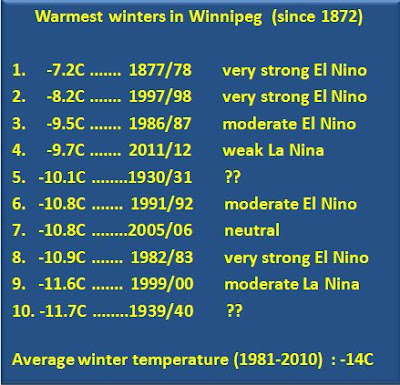 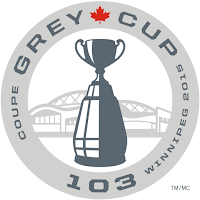 Grey Cup organizers and football fans are hoping that the mild weather pattern so far this autumn will continue through November, or at least through Nov 29th when the 103rd annual Grey Cup is scheduled at Winnipeg's Investors Group Field. Normal highs in Winnipeg by the end of November are around -6C, with lows of -14C. Temperatures on Nov 29th however have ranged from a high of +6C to a low of -33C (based on Winnipeg airport data since 1938). Last year, Winnipeg saw a high of -8.7C on Nov 29th with a low of -19.6C, and a game time temperature of -16C with strong northerly winds of 40 km/h giving windchills of -28 to -30. Officials are hoping for much milder conditions this year as footballs fans gather for the annual football finale. Given previous El Nino patterns, there are better odds this year that temperatures will be warmer than normal in Winnipeg for the end of November. Crunching some numbers from similar El Nino patterns in the past shows about a 55% chance of above normal temperatures for late November this year (highs > -4C), a 25% chance of below normal temperatures (highs < -7C) and a 20% chance of near normal temperatures (-4 to -7C)

So it appears that milder than normal conditions are favoured for the Grey Cup this year. If so, it would be the third consecutive time that Winnipeg has hosted the Grey Cup with mild weather (along with 2006 and 1998). But as any sports fan will tell you, underdogs can always win a game. So although mild weather is the odds on favourite this year, it only takes one storm system to bring in an untimely shot of snow and cold weather to southern Manitoba at the end of November, even during an El Nino year. This year's strong El Nino would lower the odds of that happening, but you can't rule it out completely. So let's hope the mightly forces of the El Nino Zephyrs from the west prove too strong for the punishing attack of the Arctic Express from the north. Go team El Nino!! 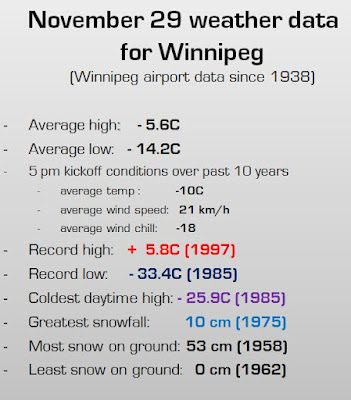 After an unseasonably warm and pleasant Thanksgiving weekend, the weather will be taking a dramatic turn tonight into Monday as a pair of cold fronts push across southern Manitoba. The first cold front is pushing through this evening and will shift balmy south breezes into the west with temperatures falling into the teens. A few showers and isolated thunderstorms are possible along this front with westerly wind gusts of 60 km/h possible. The second cold front will be pushing through the RRV early Monday morning, ushering in powerful NW winds and much cooler temperatures in the single digits.. a dramatic difference from Sunday's almost summerlike weather. The big story Monday however will be the winds.. with sustained north to NW winds of 60-70 km/h gusting to 100 km/h or more at times. This can lead to roof and tree damage as well as local power outages.  The strongest winds are expected between 4 am and noon in Winnipeg and the RRV, before the winds start diminishing somewhat in the afternoon (but still strong into the early evening)

Note that a rare STORM force wind warning has been issued for Lake Manitoba and the south basin of Lake Winnipeg for Monday morning. Storm force wind warnings are issued for winds of 48 knots (90 km/h) or greater on the lakes. These warnings are seldom issued and are used only for the strongest windstorms on the lakes. As a result, mariners and cottage owners need to be prepared for very strong north to northwest winds off the south end of the lakes gusting to 100 km/h or more overnight through Monday morning, with major crashing waves causing local shoreline erosion. This is NOT a time to be on the water, so stay onshore Monday until winds subside.

So batten down the hatches.. a major change in the weather is on the way!

Some rain on the way Wednesday, then clearing skies with a warm Thanksgiving weekend ahead

A quick moving low pressure system will cross southern Manitoba Wednesday bringing an area of rain into the Red River valley by mid to late afternoon into the evening. The bulk of the rain is expected between 4 pm and midnight in Winnipeg and the RRV with general amounts of 5-10 mm expected. Amounts up to 15 mm are possible in some areas where embedded convection will generate locally heavier showers at times. Rain will move out of southern Manitoba overnight Wednesday with clearing skies expected Thursday as a ridge of high pressure builds in from the west. That ridge will cross southern Manitoba Friday bringing sunny skies and seasonable temperatures in the mid teens.

The outlook for Thanksgiving weekend looks fantastic with well above normal temperatures expected. As the ridge moves east of Manitoba, a southwest flow of unseasonably warm air will spread across all of the Prairies Saturday and Sunday, sending temperatures soaring into the 20s along with plenty of sunshine. Temperatures in Winnipeg could be approaching record highs by Sunday (current record high for Sunday Oct 11th is 26.1C on Oct 11 1942) A cold front is forecast to push through southern MB Sunday evening with a chance of showers, followed by  somewhat cooler conditions for holiday Monday (but still above normal with highs of 16-18C) All in all, looks like a great holiday weekend to enjoy fall weather at its finest!
Posted by rob at 5:40 PM 7 comments: 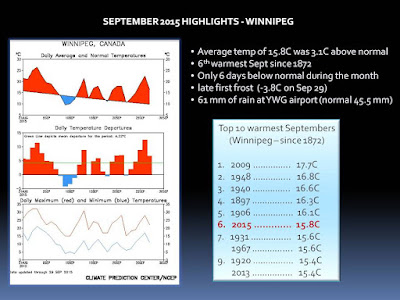