A frigid night on tap

A large Arctic airmass has spread over the Prairies, bringing well below normal temperatures across all of western Canada. The core of the cold air is being brought down by a large high pressure system centered over central Saskatchewan this morning. Temperatures under this high were in the minus 35 to minus 40 range this morning with a bone-chilling -44C in Meadow Lake, SK. This high pressure area will build over southwest MB tonight bringing frigid temperatures to southern MB overnight into Friday morning. Expect temperatures to drop to the -35C mark in many areas early Friday morning, with a possibility of -40C temperatures in traditionally colder spots (such as Wasagaming) Fortunately, winds will be light so wind chill will not be a factor. Exhaust fog however will be an issue for the morning commute. Bundle up!
Posted by rob at 9:01 AM 7 comments:

It’s been fairly quiet weatherwise across southern MB over the past couple of weeks.. but Old Man winter is by no means done with us yet.  On Tuesday, a system tracking across the northern Plains will bring an area of snow across southern MB, moving into the area around the lunch hour. Snow will steadily increase through the afternoon into the early evening before tapering off Tuesday night. 5 to 10 cm of snow is possible over the Red River valley and SE MB including , with up to 15 cm possible over southeastern MB. Behind the system, an arctic ridge of high pressure will bring a fresh Arctic outbreak over southern MB for Wednesday through Friday with well below normal temperatures.

The Manitoba provincial government released its first spring flooding outlook for southern MB today, and preliminary data suggests there will likely be significant flooding on the Red River this spring. A wet fall, cold winter, heavy snowpack south of the border, and a rare February rainfall event has led to above average soil moisture conditions in the Red River watershed. (click here for an aerial survey of snowpack water content as of early February) Based on average weather conditions over the next 6-8 weeks, a flood comparable to that of 2006 or 1996 will likely develop on the Red River this spring, which will cut off Morris and much of Hwy 75 for at least 1-2 weeks. Unfavourable weather over the next 2 months (i.e. wetter than normal) would produce a flood about 2 feet higher than 2006, but still well below that of 1997. Transportation on Hwy 75 would be cut off for 2-3 weeks in this scenario. Currently however, the risk for a 1997 flood is less than 5%.

The NWS office in Grand Forks has released an updated late winter/spring outlook covering the Feb-April period. The outlook suggests that a resurgent La-Nina will give a greater liklihood of generally cooler and wetter than normal weather over the next 3 months over the northern Plains. This will increase the odds of major flooding on the Red River this spring, as a recent press release from NOAA indicates. Soil moisture levels going into the winter were high from a wet fall, and a cold and snowy winter across ND has increased the risk of high water levels on the Red come the spring melt.
Posted by rob at 9:35 PM 16 comments:

Freezing rain overnight into this morning turned roads and walkways into skating rinks today across southern MB. 5-10 mm of freezing rain fell between 4 and 8 am across the Winnipeg area, turning the morning commute into an icy mess. Hundreds of vehicles slid into ditches across MB roadways, forcing the closure of several major highways including the TransCanada and Hwy 75. Conditions gradually improved during the day as temperatures climbed to +2C.. however additional rainfall on the still cold ground resulted in extremely icy conditions on walkways and untreated roads through the day into the night.

A winter storm watch has been issued for much of southern MB for Monday into Tuesday as a complex storm system in the US plains spreads a messy mix of wintery precipitation into the area. The storm system is expected to spread an area of freezing rain into Southern MB overnight into early Monday morning which could make the morning commute treacherous un untreated roadways. Freezing rain may last for several hours with significant icing possible in some areas Monday.. possibly 5-10 mm of ice or more. This may be enough to cause damage to tree limbs and power lines with power outages possible. By afternoon, the freezing rain is expected to change to rain, mixed with wet snow at times, over the Red River valley and southeast MB as temperatures rise above zero.. while wet snow will likely prevail over western areas. Rainfall could be in the 5-15 mm range across southeast MB Monday into Monday night while snowfall amounts of 10 cm of more are possible further north and west. Precipitation is expected to gradually change to snow over all areas Tuesday into Wednesday as colder air wraps into the system.

Considerable uncertainty remains in the timing, precipitation amounts and precipitation phases with this system. This is an unusual storm system for this time of year in southern MB.. typically storms with such a mixed variety of weather don't hit southern MB until March or April. As such residents are advised to stay tuned to updated watches and warnings on this developing situation.
Posted by rob at 7:50 AM 22 comments:

A fast moving low pressure system over the Northern Plains will track east of MB overnight, bringing a quick shot of gusty northerly winds and some light snow overnight into Saturday morning over southern MB. The cold winds gusting to 60 or 70 km/h will likely produce areas of blowing and drifting snow in open areas particularly through the Red River Valley south of Winnipeg. The gusty winds will bring a brief shot of colder air Saturday before milder air returns for Sunday.

Attention then turns to a storm system that is forecast to develop over the southern Rockies Sunday into Monday. This system is expected to track into the northern Plains Monday into Tuesday bringing a mixed bag of wintery weather to North Dakota and southern MB. At this point it appears that this system will draw up enough mild air to bring an area of wet snow or rain into southern MB late Monday into Monday night and continue into Tuesday. Uncertainty in the track, intensity and precipitation phases of this system makes it very difficult to forecast what will be in store for Winnipeg and southern MB with this event.. but the potential is there for 10-20 mm of mixed precipitation throughout the Red River valley Monday into Tuesday. Stay tuned for futher updates on this developing situation.
Posted by rob at 9:27 AM 21 comments:

Strong southerly winds gusting to 75 km/h in the Red River valley produced extensive blowing and drifting snow around Winnipeg area roadways, especially in exposed areas around the perimeter and highways to the north. Visibilities at the airport dropped to 1/2 mile in blowing snow, but visibilities were even lower at times as the attached video shows. Conditions improved in the evening as winds subsided.
Posted by rob at 10:33 PM 1 comment:

Gusty south winds today will herald the arrival of milder weather moving into southern MB over the next few days. Today however will be another cold day in the Red River valley thanks to those southerly winds gusting up to 70 km/h which will negate any increase in temperatures today, giving windchills around the -30 mark this afternoon. The gusty winds will also give blowing and drifting snow in open areas.. especially across east-west highways. Winds will drop off tonight giving much more pleasant conditions over the Red River valley Thursday with temperatures rising to -3C along with partly sunny skies. The mild weather is expected to continue into Friday before a slight cooldown for Saturday. Milder weather will return for Sunday and Monday before a possible snowstorm moves in for next Tuesday.
Posted by rob at 10:51 AM 8 comments:

It's another cold one out there this morning with sunrise temperatures around -32C. But if you think that's cold, imagine if it was 30 degrees colder. That's what it was like on this date in 1947 in the small town of Snag, Yukon Territory when the community recorded a low temperature of -62.8C, a reading that still stands as the coldest temperature ever recorded in Canada, and all of North America. The temperature was recorded during a severe cold snap between Jan 27th and Feb 4th when the temperature failed to climb above -40C in Snag, with nightly lows of -50 to -60C. The following link, Life at minus 80, gives an interesting account of what the observers witnessed that record cold morning. This link gives more details on the historic cold snap.
Posted by rob at 9:25 AM 6 comments:

Whiteouts cause pile-up on TransCanada 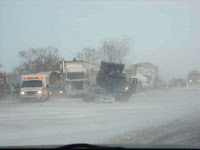 A sudden snowsquall moving across the TransCanada Sunday afternoon brought whiteout conditions that contributed to a large multi-vehicle accident just east of Portage around 3 pm. The collision, which occurred in the wesbound lanes near the Hwy 13 junction near Oakville, involved 5 tractor trailers and 7 vehicles. Luckily there were no fatalities or serious injuries. Sources say the initial collision involved 2 tractor trailers and a car, which set off a chain reaction as other westbound motorists couldn't stop in time in the blinding whiteout to avoid the collision. The sudden snowsquall lasted only about 30 minutes and was associated with an Arctic cold front pushing through southern MB at the time. Sunny skies and temperatures of -5C ahead of the front changed suddenly to whiteout conditions and gusty north winds behind the front, with temperatures falling to -12C. These short-lived blizzards can be quite dangerous to travellers as conditions can deteriorate rapidly with little warning.
Posted by rob at 1:39 PM 2 comments: