Winnipeg snowfall - by the numbers

It's been a snowy winter in Winnipeg this year.  Snowfall started in mid November and has not quit, with persistent cold making the snow pile up to heights we haven't seen in a while.  Surely this has to be one of the snowiest winters on record for Winnipeg, right? Well, not really.  As of March 18th, our total snowfall this winter has been 151 cm (since October 1st)  That's well above the normal seasonal snowfall of 114 cm that usually falls in Winnipeg between October and May (based on 1981-2010 average for Winnipeg airport) And we still have a good 4-6 weeks of potential snowfall left this season to add to the total. 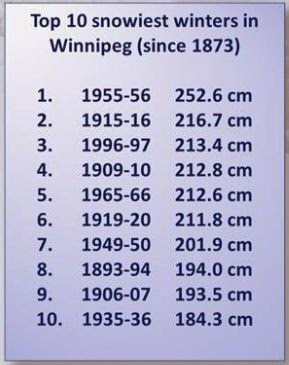 But as you can see from the table on the left, we still have a ways to go to even get in the top 10 snowiest winters of all time in Winnipeg, never mind the snowiest ever.  In 140 years of records, only 7 winters have cracked the 200 cm mark, with the snowy winter of 1955-56 topping the list at a whopping 252.6 cm, over twice the normal snowfall for the city. Most recently, the winter of 1996-97 has been the last winter to crack the 200 cm mark, thanks in large part to a record April blizzard of 48 cm that led to the "Flood of the Century" that spring. So although we still can get some good snowfalls between now and May, we'd have to get at least 60 cm over the next month to crack the top 5 snowiest winters in the city.

Looking at a graph of winter snowfall in Winnipeg since 1873 reveals some interesting observations. Most notable is how erratic Winnipeg snowfall is from year to year, with wild swings from well above "normal" to well below. In fact, it's tough to say what "normal" is, since snowfall varies so much every winter. One way to define "normal" is to look at a longer term average. Looking at the 30 year running average (red line), one can see that snowfall has averaged roughly 125 cm for much of Winnipeg's history since 1873. That average started to dip in the 1970s and 1980s with several below normal snow seasons during that time. As a result, our 30 year running average dipped to a low of 110 cm by the 1990s. Since then, average snowfall has been trending up again, with a trend towards that 125 cm average thanks to the last few winters. Perhaps this is nature's way of reverting back to more typical snowfall amounts for this part of the world.


The graph also shows another interesting tidbit. The least snowy winter in Winnipeg was way back in 1877-78, during Winnipeg's warmest winter on record. Only 31 cm of snow fell that entire winter, during the "year without a winter" that was a result of an unusually strong El Nino that year that had worldwide impacts on weather, rainfall and crops. December 1877 was virtually snowfree in Winnipeg (only 0.5 cm the whole month) and no month that entire winter exceeded 8 cm of total snowfall. Incredible.  (*NOTE: Some recent information suggests that Winnipeg may have experienced a significant snowfall later that spring on May 2 1878. In a Department of Transport study on the "Climate of Winnipeg" (Labelle, Brown, and Hasinoff, June 7 1966), it notes that the heaviest May snowfall on record in Winnipeg was 10.7 inches (27.2 cm) on May 2 1878. Officially in the digitized climate archives online, snowfall for Winnipeg on that date is listed as only 1.8 cm, or 0.7 inches. It's possible the data was incorrectly entered into the climate database as 0.7" instead of 10.7". Note that the nearby St Andrews climate site recorded 12" of snow (30 cm) on May 2-3rd 1878, so the potential is there that Winnipeg had much heavier snow that day than the current archive shows. I will update this info if and when I hear more.)