Long range computer models are coming into agreement that a significant winter storm will likely be impacting southern MB by Saturday.  Models show a storm system developing over the central US Rockies later this week and tracking into Minnesota by Saturday, bringing a swath of snow across the northern Plains states and southern Prairies. Although models agree on this general premise, there is still some uncertainty about exactly where the storm will track, which will have major implications on where the heaviest snow falls over southern MB. Currently, there are 3 main scenarios that are possible. With each scenario, I give a likelihood of that outcome occurring (purely subjective based on my own analysis and interpretation) 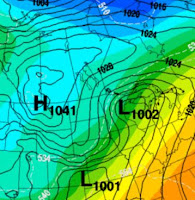 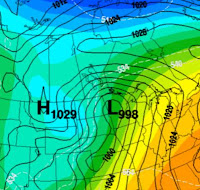 
Scenario 3 - Strong low tracking near Lake of the Woods 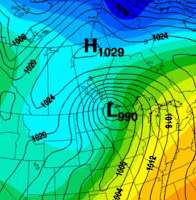 In all cases, the bulk of the snow is expected to fall Saturday with snowfall tapering off Sunday. Winds will depend on the strength and track of the low, but generally the strongest winds will accompany the area of heaviest snow, which will lead to snow and blowing snow issues.


I will continue to monitor the situation and have updates as the week progresses. During that time, updated model solutions will hopefully be converging towards a more consistent forecast that I can relay with more confidence. In the meantime, you may want to start making sure you have the winter gear handy for the end of the week, and your vehicle is prepared for winter driving conditions (including snow tires)