Get ready for a wintery blast Tuesday! Strong winds and snow with blowing snow and poor visibilities on the way for Winnipeg and RRV

An intense clipper system will be tracking across Manitoba Tuesday bringing strong winds and snow to much of the province. Here in Winnipeg and the Red River valley, winds will be the main story rather than snowfall Tuesday, especially through the midday and afternoon hours when southerly winds will be howling up the valley gusting to 70 or even 80 km/h. These winds, combined with loose and falling snow, will lead to widespread blowing and drifting snow with poor to blizzard-like conditions in the open country. Keep this in mind if you plan on being on the roads tomorrow. Snowfall amounts with this system will be highest over the Interlake and central MB, where 10-20 cm of snow is possible.. while amounts here in Winnipeg and the RRV will be in the 5 cm range. Snowfall amounts however will be impossible to measure accurately as winds will be so strong here in the RRV, with extensive drifting. Winds shift into the NW behind the system by Tuesday evening, with gusts of 60-70 kmh at times bringing colder temperatures for the rest of the week.
Posted by rob at 10:05 AM 14 comments:

One more mild day Tuesday, then colder weather pushes in Wednesday with gusty winds and some snow


Above normal temperatures will continue across southern Manitoba Tuesday as a southeast flow sends temperatures up to the freezing mark by Tuesday afternoon across the RRV including Winnipeg. The mild weather will persist Tuesday night into early Wednesday before a sharp Arctic cold front pushes through the RRV Wednesday morning, shifting winds into the north and sending temperatures falling through the day. In addition, the cold front will be accompanied by a band of snow as it pushes through, with 1-3 cm possible through midday. The gusty north winds will also lead to blowing and drifting snow especially outside the city, with a period of poor visibilities likely as the band of snow pushes through. Driving conditions will likely become poor for a few hours Wednesday across the RRV so be prepared for a return to wintery conditions if you're out and about. Temperatures near -5C early Wednesday in Winnipeg will plummet to -12C by noon, and -18C by 5 pm, so be prepared for a much colder commute home.  Cold but dry weather is expected for the remainder of the week into the weekend.
Posted by rob at 4:34 PM 20 comments:

Coldest final week of December in over 80 years. Frigid weather eases as we head into January

It was a frigid end to December over much of the continent, including throughout the Prairies and southern Manitoba. In Winnipeg, the final week of the month averaged a bone-chilling -27.7C, the coldest final week of December since 1933, and the 4th coldest since records began in 1872. 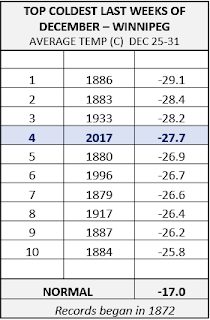 The frigid finish to December was in stark contrast to the first 3 weeks of the month which were milder than normal. In fact, through Dec 23rd, December was averaging about 3C above normal (-10C vs -13C)  But that all changed by Christmas Eve as frigid temperatures moved in for the holidays with temperatures averaging over 10C below normal between Christmas and New Year's Eve. As a result, December ended up about 1.5C below normal in Winnipeg with a mean temperature of -14.8C  (vs the December "normal" of -13.2C)

Luckily, the massive Arctic airmass that has plagued much of North America over the past week has retreated for the beginning of January with temperatures rising to normal values in southern MB, and even above freezing in Alberta, which had seen temperatures of -40C just a couple days ago. Colder weather will prevail through this week (but not like last week), before another moderating trend sets in next weekend with temperatures near or above normal over southern Manitoba. Seasonably cold weather is expected next week.  Mid January marks the coldest time of the year on average in southern MB with normal highs of -13C and lows of -23C for Winnipeg. Daily averages slowly climb through the latter half of January rising 2C by Feb 1st.
Posted by rob at 4:17 PM 1 comment: