The storm system that brought a mix of snow and rain to much of the Red River valley Monday is now slowly tracking into Minnesota this morning, with colder air and snow wrapping around the system across southern Manitoba. Rain overnight changed to snow early this morning in Winnipeg, and will continue through the day with 4 to 8 cm possible by evening. Temperatures will hold steady near the freezing mark all day with northerly winds gusting to 50 km/h. Road conditions will once again be challenging, especially this morning.. so expect another SLOW commute today and give yourself plenty of time to reach your destination. Periods of snow will continue tonight with another 2 or 3 cm possible before snow tapers to flurries Wednesday.  Temperatures will gradually be cooling off over the next several days with highs below freezing.. so it looks like the covering of snow we get today into tomorrow will finally be sticking around for the winter. After the warmest November on record, it looks like winter is finally here!
Posted by rob at 6:39 AM 4 comments:

After a record warm start to November, winter finally returned to southern Manitoba as the first measurable snow of the 2016-17 winter season fell across Winnipeg and southeast Manitoba today. Snow, mixed with ice pellets, began overnight creating a slippery and slow morning commute. About 3-5 cm of snow fell across the city by midday before it turned to a misty drizzle.  The snowfall marked the latest date on record for the first MEASURABLE snowfall of the season ("measurable" snowfall is defined as a snowfall of 0.2 cm or more)  The previous latest date of the first snowfall in Winnipeg was Nov 21 1963, set during the warmest fall on record (sidenote: President Kennedy was assassinated the next day in Dallas). Winnipeg snowfall records date back to 1872 (144 years of data) 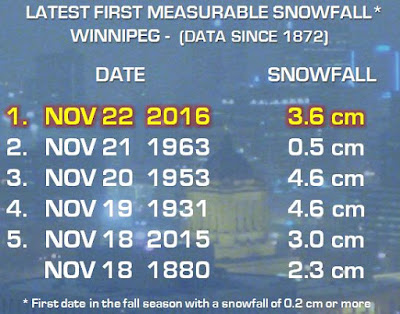 Today's snowfall also marked the first time in 225 days that Winnipeg has had measurable snow (last recorded on April 10th when 0.4 cm fell). The 225 days is Winnipeg's 3rd longest snowless streak on record, behind only 1998 (232 days) and 1900 (228 days)  Average snowfree period in Winnipeg is 181 days, which means Winnipeg enjoyed 6 more weeks of snowfree weather this year compared to average. 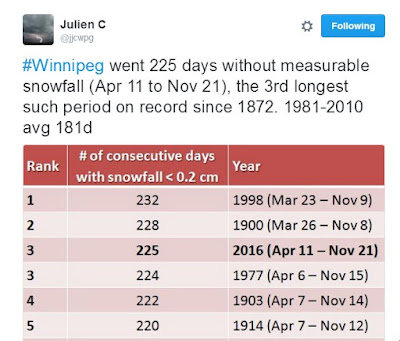 
A Colorado low winter storm system tracked across Iowa into southern Minnesota Friday bringing a blast of wintery weather across much of northern and western Minnesota. The storm dropped 20-40 cm of snow across northern Minnesota with up to 60 cm (24 inches) reported near Orr in the far north. The storm also produced strong northerly winds which resulted in blizzard like conditions across much of the western state leading to numerous traffic accidents and some road closures. As the storm moved north, heavy snow pushed into NW Ontario mainly east of Dryden with 30-40 cm reported in Atikokan and Upsala, and 10-25 cm in Thunder Bay. Earlier in the week, models were suggesting this storm could be taking aim at southern Manitoba, but the storm took a track further south and east sparing Manitoba from any major impact. We did however get colder weather on the backside of the storm with northerly winds producing bands of lake effect flurries off Lakes Winnipeg and Manitoba. After a record mild start to November with well above normal temperatures over the first half of the month, temperatures will be closer to normal over the next few days.

When's it going to snow here?

So after missing this big storm Friday, and missing several snowfalls in October which affected Saskatchewan and Alberta, Winnipeg and much of the RRV are still awaiting their first measurable snowfall of the season. As of today (Nov 18th), Winnipeg has gone 222 straight days without measurable snow, the 4th longest such streak on record here (see table below). Our last measurable snow in the spring was 0.4 cm on April 10th (we had some snowflurries on May 13th, as well as Oct 7th and Nov 2nd, but no measurable accumulation on those days, just a "trace")


Barring any measurable snow from lake effect flurries tonight into Saturday morning (some areas east and west of Winnipeg are getting some accumulating snow off Lakes Winnipeg and Manitoba), the next threat of snow over southern MB will be Monday night into Tuesday as a low pressure system in Saskatchewan moves east, spreading an area of snow into Manitoba. This will not be a major winter storm like the one that hit Minnesota today, but it may result in our first measurable snow here in Winnipeg and the RRV, with perhaps 2-5 cm by the Tuesday morning commute. 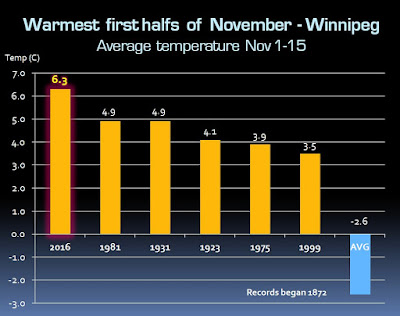 November is off to a mild start as a large upper ridge of high pressure takes hold over mid-continent, bringing an extended spell of above normal temperatures across the Prairies. Temperatures have soared into the mid to upper teens over North Dakota, southern SK and Alberta, with even some 20C temperatures in southern Alberta (21C in Pollockville, 20C in Drumheller)  The mild weather will push into southern Manitoba over the next day or so as a warm front slowly moves north. This front was accompanied by extensive low cloud and fog today over southern Manitoba, which was slow to clear as increasing temperatures aloft produced a strengthening inversion that trapped the low level moisture much of the day. Gradually, this low cloud and patchy fog is expected to push north and clear during the night low as level southerly winds increase this evening. Note however, winds are expected to decrease overnight which may lead to additional low cloud and fog development in some areas early Friday. Friday should be a nicer day with morning cloud and fog patches giving way to a mix of sun and cloud, and highs finally reaching the double digits across much of southern MB. The nice conditions are expected to continue into the weekend with highs in the mid teens, possibly upper teens along the Pembina escarpment. A disturbance tracking up through the Dakota may bring some light showers Sunday night into Monday, but they shouldn't amount to much with a few mm possible. Mild weather should continue through next week with highs at or above the 10C mark through Remembrance Day, and nighttime temperatures at or above freezing. Note that the longest stretch of highs at or above 10C in Winnipeg in November is 8 days from Nov 2-9 1963. There's a possibility that Winnipeg could be challenging that record. Otherwise, enjoy the October like start to November!
Posted by rob at 4:37 PM 9 comments: