The frustrating weather pattern that has plagued southern Manitoba with frequent precipitation events over the past 6-7 weeks continues to linger into mid July with yet more rain today. A large storm system tracking through northern Manitoba will bring cool, windy and unsettled conditions throughout southern Manitoba today, making it seem more like a day in mid September than mid July. But once this system finally starts to move eastward tomorrow, a gradual improving trend is expected later this week through the weekend and possibly through much of next week with a warmer and drier pattern setting up. Long range models are indicating the development of a massive dome of hot and stable air that will be setting up over the central US plain states next week, that hopefully will edge northward into southern Manitoba. The core of the heat will be south of the international border over states like Iowa, Nebraska and South Dakota where temperatures of 35-40C are likely in what will be an extended heat wave next week. Some traditionally hotter spots there may be seeing temperatures as high as 43C (110F)  In Manitoba, temperatures will likely be above normal with temperatures of 25-30C expected with a trend towards less frequent shower and thunderstorm activity. However, given that southern Manitoba is expected to be lying on the northern edge of the heat dome, there will likely be periodic thunderstorm activity as impulses round the upper ridge (aka "ridge riders")  One potential type of severe weather threat with this type of upper pattern is the "derecho" - a cluster of powerful long lived thunderstorms that ride along the periphery of the upper ridge and produce widespread wind damage along its path, often at night. 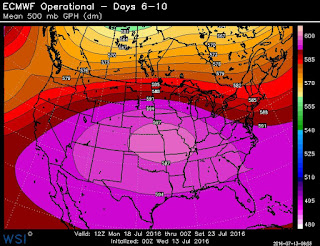 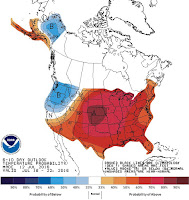 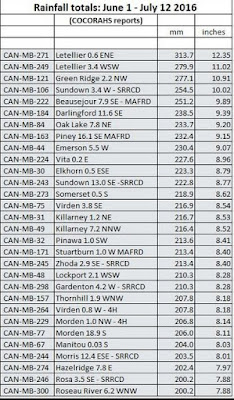 A pattern change to drier and warmer weather is desperately needed over southern Manitoba. After a dry start to the growing season, the overall pattern turned wetter and more unsettled in late May and has persisted through much of June through the first half of July. Some places in the Red River valley have seen over 2 times the normal precipitation since June 1st. Lettelier for example has recorded a whopping 313 mm of rain from June 1st to July 12th, some 260% of normal. Since May 23rd, Winnipeg (and much of southern MB) has had only one stretch of 4 or more days with no measurable rain (June 13-16) otherwise, rain has been occurring every other day or two over the past 6 weeks, often heavy at times. Farmers are hoping that drier and warmer weather will salvage what could be a very good crop this year.