It was a bit of a shock to the system this morning as Winnipeggers woke to -25C temperatures and windchills close to -40.. readings that have been relatively rare this winter. The cold snap was ushered in by an Arctic cold front that slipped through southern Manitoba Sunday night bringing about 3-5 cm of fresh snow, along with gusty north winds to 70 km/h that caused poor visibilities in blowing snow and led to many highway closures last night. Brighter, calmer weather is in store today, but temperatures will remain well below normal with highs only in the mid minus teens and lows tonight back in the -20s. The good news is that the rest of the week will see a moderating trend with temperatures climbing steadily each day this week. Highs by Friday in Winnipeg will be rising to -3C and above 0C over the weekend.

Despite the cold end to February, the month finished 2C above normal at -11.1C, our 6th consecutive month above normal.  The month capped off a mild winter in which all 3 months were above normal. In fact, the 3 month period of Dec-Jan-Feb finished as the 9th mildest winter in Winnipeg since 1872 with an average temperature of -11.3C (normal -14.3C)  The strongest El Nino in the past 50 years was a prime reason for the mild winter, helping to bring more frequent and persistent mild airmasses from the Pacific, while minimizing intrusions of Arctic airmasses from the north.  The result was a fairly tame winter for southern Manitoba, with 3 out of every 4 days averaging above normal. In Winnipeg, there was only one day with a temperature of -30C or colder (-32.3C on January 17th)  A normal winter would see at least 12 such days. Snowfall has been slightly above normal in Winnipeg, mainly due to a snowy week in December in which 41 cm of snow fell from the 16th to 23rd.  As of Feb 29th, snowfall has totalled 101 cm in Winnipeg, about 17 cm more than average to the end of February. 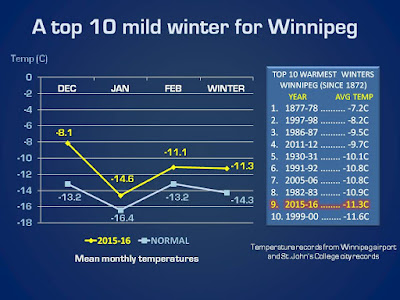 Clipper system to bring snow across southern Manitoba this weekend

A clipper system is forecast to track across southern Manitoba this weekend bringing an area of snow with it Saturday afternoon into Sunday. At this point, it looks like an inital band of snow will push across the regions Saturday afternoon, with possibly 2-4 cm of snow for Winnipeg and the RRV along with a risk of ice pellets over SW MB.  This band of snow will push off Saturday evening before another area of snow with the main clipper spreads across the area Saturday night into Sunday. At this point, models are suggesting the bulk of snow will fall mainly across western MB from Dauphin to Pilot Mound into North Dakota (10-15 cm possible) with lesser amounts of 5-10 cm for Winnipeg and 5 cm or less over SE Manitoba.  In addition, gusty NW winds are expected behind the system Sunday, so blowing and drifting snow will likely result in reduced visibilities in rural areas, especially west of Winnipeg to the SK border and south to the ND border.  Colder weather will follow in the wake of this system for the start of the new work week with highs in the minus teens and lows in the minus 20s for the first half of the week.

UPDATE: (Friday evening) NWS has issued blizzard watches for eastern ND and high wind watches for western ND for Sunday. Strong NW winds gusting to 80-90 km/h are expected on the backside of this system over much of North Dakota Sunday. The strong winds combined with falling or fresh snow will lead to poor visibilities in blowing snow especially over eastern ND and the RRV.  Although the strongest winds are expected in ND with this system, winds will be gusty over southwest MB and the southern RRV as well, so be prepared for  poor travelling conditions Sunday into Sunday night, especially south and west of Winnipeg.

UPDATE: (Saturday afternoon):  A blowing snow advisory has been issued for Winnipeg and the Red River valley for Sunday as strong NW winds of 50-60 gusting to 70-80 km/h develop overnight into Sunday morning. The strong winds will combine with fresh or falling snow to produce poor visibilities in open areas, with blizzard-like conditions possible in some areas, especially in the southern RRV.  The extent of blowing snow will depend on how much new snow falls overnight and Sunday, which currently looks to be in the 5 cm range for most of the RRV, including Winnipeg.  Conditions should improve Sunday evening as winds decrease.  Note that NWS has issued blizzard warnings for eastern ND for Sunday, inlcluding the RRV from Pembina to the South Dakota border.
Posted by rob at 9:48 PM 4 comments: