Mild end to January.. February to start on a cold note..

January is ending on a mild note as another flow of mild Pacific air floods across the Prairies into southern Manitoba. Balmy west winds pushed temperatures up to +3.2C in Winnipeg today, some 14C above normal for late January and just 1.2C off the record high for the date (4.4C in 1992)   Above normal temperatures will continue over the weekend, although they will be cooling off from Friday's values with highs near freezing Saturday and -5 Sunday. The mild end to the month will ensure that January ends up above normal with an average temperature of around -14.5C, or 2C above the normal January mean of -16.4C.  This will be the fifth consecutive month with above normal temperatures in Winnipeg and southern Manitoba, stretching back to last September.

Turning colder for first half of February

The outlook for February looks colder, at least for the first half of the month as the upper weather pattern changes to allow more prolonged periods of Arctic air into Manitoba. Long range models are indicating that the Arctic vortex over Baffin Island will dig an upper trof across Hudson Bay into eastern North America, while an upper ridge builds over the West Coast. This type of setup usually means a more sustained period of below normal temperatures for southern Manitoba. This will likely mean a colder than normal first half of February.. before hopefully a pattern change to milder weather for the latter half of the month. 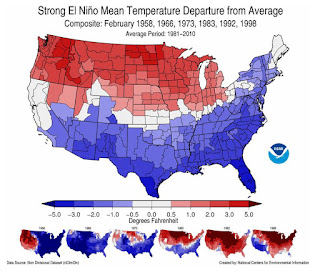 A colder than normal February would be at odds with what history suggests February will be like during strong El Nino years (as we have this year)   A composite temperature plot of the past 6 strongest El Ninos since 1950 (image left) shows a tendency of above normal temperatures over the Northern Plains (and southern Prairies)  During the last very strong El Nino in 1997-98, February ended up as the warmest February on record in Winnipeg with a mean monthly temperature of -4.6C, some 9C above normal. The 2nd warmest February in Winnipeg, in 1878, was also during another very strong El Nino year. But there have been some exceptions.The Februarys of 1958 and 1966 were colder than normal in southern Manitoba, especially 1966 which featured a brutal cold snap in mid February that saw temperatures plummet to -45.0C in Winnipeg on the 18th, the second coldest temperature ever recorded here since 1872. But take heart, even in those cold Februarys, temperatures turned milder in the latter part of the month, including a record high of +11.7C in Feb 1958 on the 25th, Winnipeg' all time warmest February temperature. So if we do get that cold weather that is currently being suggested over the next two weeks, there's a good possibility that it won't last the entire month.

A quick moving storm system over northern Alberta will be dropping southeast into southern Manitoba overnight, bringing a wintery mix of precipitation to the area. Snow will be spreading into the Parklands and northern Interlake regions after midnight reaching Winnipeg and the Red River valley by 5 am Wednesday morning. Snow will likely be heavy at times through the morning rush hour in Winnipeg with 5 to 10 cm possible between 6 am and noon. That will have a significant impact on the morning commute due to snow covered roads and poor visibility so plan on taking extra time getting to work or school Wednesday morning.  Further west, snow will likely mix with or change to freezing rain over southwest Manitoba where freezing rain warnings are in effect.

For Winnipeg, snow will taper off by noon before things will get a lot slushier in the afternoon as our winds shift into the west tapping milder air from Saskatchewan. This will send temperatures above freezing in the Red River valley including Winnipeg with afternoon highs near +2C expected. That will mean a lot of slush and melting snow on the roads into the evening rush hour, so make sure you have plenty of washer fluid if you're out driving Wednesday.
Posted by rob at 5:06 PM 4 comments:

Staying cold into next week.. then a warming trend

Southern MB will be locked into a cold weather pattern for the next little while until a moderating trend begins next week.  Temperatures this week will continue below normal (normal highs -13C, lows -23C) with a reinforcing shot of Arctic air this weekend when temperatures will struggle in the mid minus 20s, and lows in the minus 30s. This will be the longest stretch of below normal temperatures in southern MB since at least August. Long range guidance is hinting of a moderating trend by the middle of next week, with temperatures hopefully rising into the minus single digits by the end of the week.
Posted by rob at 6:27 PM 4 comments:

Mild start to January.. but colder weather on the way by next weekend

2016 is off to a mild start over southern Manitoba with temperatures above normal along with mainly sunny conditions. (Normal highs right now are -13C with lows of -23C) The mild and tranquil weather pattern is expected to continue much of this week, before a change to significantly colder weather (as in plug-in-your-car cold) moves in later in the week through next weekend.


Temperatures this week will be mainly in the minus single digits with no significant precipitation expected through Thursday. On Friday, a storm system passing through the Dakotas will spread an area of snow across southern Manitoba, with a general 2-5 cm possible. Winds will shift into the north behind this system, heralding the arrival of much colder air for the weekend into early next week. Look for daytime temperatures in the minus 20s and nighttime lows in the minus 30s as the coldest airmass of the season pushes into the Prairies.

So once that cold air gets here, how long will it last?  The coldest core of the airmass looks like it will be coming through Sunday through Tuesday before a slight moderation next week. After that, it's tough to say how January will end up, however given past previous strong El Nino episodes, the odds favour a milder than normal January over southern MB.  Of the past 6 strong El Ninos since 1950, five Januarys were milder than normal here, including during the record strong El Ninos of 1997-98 and 1982-83.  (see composite map below)  Note that cooler than normal weather is more likely over the southern US due to a strong southern jet stream bringing more frequent storm systems and precipitation from California through Texas to the US southeast.