A general look at the weather this week..

Sunday Nov 22nd: Hi: +1C.
Some snow then turning milder.
System tracking through central MB will spread an area of snow across the Interlake and eastern Manitoba. Bulk of snow will be mainly north and east of Winnipeg where 2-5 cm is possible, but Winnipeg will likely see a period of snow between 9 am and 3 pm, with a dusting to 2 cm possible. Once the snow ends, winds will shift into the west and draw in milder air sending temperatures up to the 0 or +1C mark by late afternoon.

Wednesday Nov 25th: Hi: -2C in the morning falling to -8C by evening.
Turning windy and colder with snow.
A potent storm system emerging from the west coast will track across Montana and into the Dakotas bringing a widespread area of snow across southern Manitoba. Current indications are for 2-5 cm of snow for Winnipeg during the day. Increasing north winds and colder temperatures will likely produce areas of blowing and drifting snow especially in the afternoon and evening.

Friday Nov 27th: Hi: -7C
Nicer afternoon after a cold start to the day with temperatures at or below -20C.

Sunday Nov 29th: Hi -5C
Grey Cup day: Fair and seasonably cold.
At this early point, it looks like conditions should be fair and seasonably cold for the Grey Cup with average temperatures for late November and no precipitation expected. Models are not showing any major storm systems over the Grey Cup weekend, with a warming trend expected for the first week of December.  Things could change, but at this point, weather conditions look favourable for the Grey Cup game.
Posted by rob at 5:32 PM 8 comments:

A pair of strong storm systems over North America will converge into a major storm system over the Manitoba/Ontario border late Wednesday, bringing the first onslaught of wintery weather to much of southern Manitoba Wednesday night into Thursday.  This will be the first real taste of winter for many in southern Manitoba after what has been an exceptionally mild fall to this point with little in the way of snow or cold weather.  Wednesday will start off cloudy and mild with periods of rain developing in the afternoon ahead of the converging storm systems. Things start to get interesting later Wednesday afternoon into Wednesday evening as the two storm systems begin to converge over NW Ontario producing an increasing NW flow of colder air across southern Manitoba. Rain will change to snow Wednesday evening as temperatures drop below the freezing mark, and continue through Wednesday night into Thursday morning. Strong northwest winds of 50-60 km/h with gusts of 70-90 km/h will produce locally poor visibilities in snow and blowing snow with local power outages possible due to the combination of ice buildup and strong winds. Snowfall amounts for Winnipeg and the RRV are expected to the in the 5 cm range with the bulk of snow falling across central and northern Manitoba, including the interlake and Whiteshell regions where locally heavier bands of lake effect snow are possible. As a result, expect a slower commute Thursday morning as drivers deal with the first snowfall of the season along with subfreezing temperatures and strong winds.
Posted by rob at 4:13 PM 4 comments:

Very mild start to November as extended autumn continues.. but change to colder weather on the way this week

It was another glorious fall-like weekend across southern MB with sunny skies and temperatures in the double digits. Sunday's high of 13.1C in Winnipeg was almost 15C above normal for Nov 15th, and was our 21st straight day above normal (since Oct 26th). The weather was par for the course in what has been an exceptionally mild start to November across much of central and eastern North America, especially over the upper US midwest and central Canada, including southern MB. In Winnipeg, the average temperature over the first half of November has been +3.3C, which is almost 6C above normal for the Nov 1-15 period.  Every day this month has been above normal so far and the coldest temperature this month has been only -6.4C, even though normal lows are now close to -10C. The downside of the mild weather has been frequent cloud cover, with only 4 days of sunshine through the first 12 days of the month. Snow however has been virtually absent in Winnipeg, with only a couple days with some light flurry activity. As of mid November, the grass is still green in the city thanks to a lack of deep freezes so far.

As mild as it's been, it may be surprising to learn that Winnipeg has had even milder starts to November in previous years. At 3.3C, the first half of November this year will rank only as the 8th mildest start to November since 1872. The warmest start to November (as defined by the mean daily temperature from Nov 1-15) was in 1981 and 1931, with an average temperature of +4.9C over the first half of the month.  Nov 1981 saw 10 days reach +10C or more in the first half with a peak of 18.2C on Nov 4th.  This year, Winnipeg has recorded only 4 days in November of +10C or more. This shows that our warmth this year has been mainly due to exceptionally mild nights, rather than mild days. Frequent cloud cover and lack of cold air intrusions has resulted in a persistence of mild nights with temperatures well above normal minimums for November. The top 10 warmest first halfs of November in Winnipeg since 1872 are: 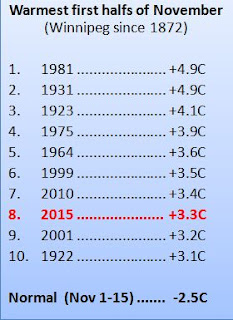 So what does the rest of November look like? Well, mild weather is expected to continue the first half of this week, then a pattern change around mid week as a strong storm system brings a substantial cool down later this week with temperatures likely falling below normal for the first time this month. We may even see our first shot of accumulating snowfall here in the city Wednesday night into Thursday. Colder than normal temperatures will dominate through next weekend before a moderating trend next week.