It was a wet finish to the month of August over Winnipeg and the Red River valley as another weather system brought widespread rain to southern Manitoba today. In general about 15-25 mm of rain fell in most areas, with 20 to 40 mm over parts of the southern RRV and southwest MB.  In Winnipeg, the official rainfall at the airport today was 18 mm, with 17 mm falling at the Forks. At my location in Charleswood, I picked up 21.6 mm today bringing my monthly total to 137 mm.. well above the August average of 77 mm. The bulk of this month's rain has fallen over the past 2 weeks, with a couple of significant rainfalls across the city including August 21st when a slow moving thunderstorm complex dumped 50-100 mm over the southwest to central parts of the city. Officially, the airport recorded 104 mm this month, while the Forks had 133 mm with amounts over 170 mm from the Tuxedo to Linden Woods area.

The wet finish to the month was in sharp contrast to a dry July and first half of August which saw below normal precipitation in Winnipeg.  Temperature-wise, August will finish with an average temperature around 19.3C at YWG airport.. slightly above the average August temperature of 18.8C.
Posted by rob at 9:30 PM 12 comments:

It's going to be an interesting 24 hours coming up over southern MB as a strong low pressure system over the western Dakotas tracks into southwest Manitoba Sunday. Showers will spread into southern MB this evening ahead of a warm front associated with the storm system, with heavier showers and thunderstorms likely overnight into Sunday morning as increasingly moist conditions spread north. Some of the rainfall could be quite heavy tonight into Sunday, with amounts of 25 to 50 mm possible across much of the Red River valley by Sunday morning. Rainfall rates may be torrential at times, which could cause local flash flooding especially in urban areas. Showers and scattered thunderstorms will settle across the Interlake and western MB Sunday giving widespread soaking rains in those areas, with local amounts of 50 to 75 mm possible by Sunday night. Further south, showers and thunderstorms will move out of the RRV Sunday morning, with a southerly flow bringing warmer and more humid conditions by the afternoon. An approaching cold front however will set the stage for scattered thunderstorms to develop over the RRV and SE MB Sunday afternoon into the evening.. with a risk of locally severe thunderstorms if there's enough sunshine that breaks through in the warm sector. (See local stormchaser Dave Carlsen's blog entry on Sunday's severe thunderstorm potential) Much cooler conditions will follow in the wake of this cold front Monday and Tuesday with high temperatures only in the teens. All in all, an active period of weather coming up over the next 24 hours!

After an extended period of warm and humid weather, Mother Nature unleashed over Winnipeg late Thursday afternoon with a nearly stationary thunderstorm complex that swamped much of the central and southern parts of the city. Thunderstorm cells started developing near the city around 5 pm.. and by 530 pm, a nearly stationary band of heavy thunderstorms had set up from the southwest part of the city into the downtown core.  Over the next 90 minutes, some 50 to 80 mm of rain /a month's worth of rain/ would fall across this swath, resulting in extensive flooded roads and underpasses, as well as flooded buildings (including Polo Park mall).  The rush hour deluge led to traffic chaos with several main streets in and out of downtown restricted or blocked due to floodwaters. City officials are describing the event as a 1 in a 100 year storm based on rainfall intensity. ( More photos and stories on the flooding from Winnipeg Free Press and Winnipeg Sun. )


This was the second time this week that the Tuxedo to Linden Woods area has been hit with heavy rainfall. On Monday afternoon, a narrow band of heavy showers and thunderstorms dumped 35 to 50 mm along this swath. Tuxedo Park school recorded 49 mm Monday with another 70 mm Thursday, for a total of 119 mm within 4 days. Linden Woods has recorded 109 mm since Monday. Normal August rainfall is 77 mm in Winnipeg. 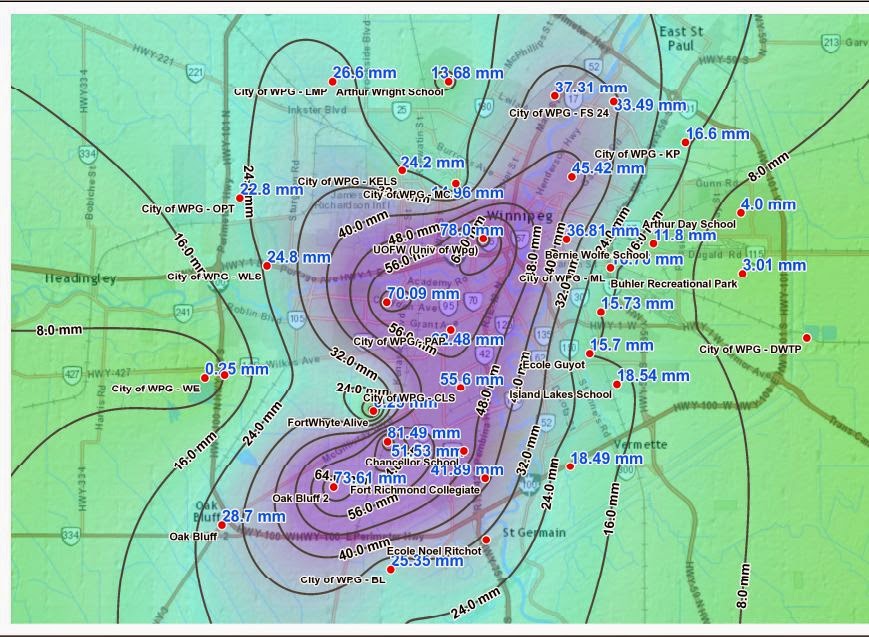 The following is a map from the city of Winnipeg showing the distribution of rainfall in the city from Thursday's rainstorm. One can see the heaviest rain axis stretching from the southwest Perimeter into the downtown core up towards North Kildonan. The maximum was in the Whyte Ridge area which saw over 80 mm of rain between 530 and 730 pm. (NOTE: The Fort Whyte station recorded an erroneously low number on this map due to a plugged gauge) The city has a network of over two dozen rain gauges scattered throughout Winnipeg to monitor rainfall within the city, which can vary widely in short distances during convective storms (which is the primary mechanism for precipitation in the summer months here)  This network of stations helps give the city a much more detailed picture of rainfall distribution within Winnipeg, compared to only 2 official Env Canada sites in the city (Winnipeg airport and The Forks)  Link to City of Winnipeg rainfall map.