Hot week ahead as heat wave builds over western Canada

A massive upper ridge over western North America is producing some of the hottest weather in years over parts of the western US, and some of this heat will be spreading across western Canada and the Prairies this week. BC and Alberta will see the hottest weather over the Canada Day weekend before the heat spreads east over the eastern Prairies during the upcoming week. For Winnipeg, sunny warm weather will prevail today and Canada Day with temperatures in the upper 20s along with light winds and comfortable humidity.  The heat starts turning up Tuesday and Wednesday as temperatures climb into the low 30s under sunny skies. A weak front may bring some scattered thunderstorms by Thursday and Friday, with slightly cooler weather expected over the weekend.
Posted by rob at 7:23 AM 54 comments:

It's taken awhile.. but it looks like Winnipeg could be seeing its first 30C reading of the year today as a warm front along the US border lifts north today, tapping very warm and humid air from the south. The increasing humidity will result in humidex values rising to the mid 30s this afternoon.. especially over the southern RRV. By this evening, a trof of low pressure pushing into SE Saskatchewan is expected to trigger some strong to locally severe thunderstorms over SW Manitoba with torrential rain, large hail and strong wind gusts as the primary threats. Isolated tornadoes are also possible with initial strong storms that develop.  The thunderstorms are expected to spread into the Interlake and RRV late this evening.. with the potential for heavy rain and strong winds as well as frequent lightning. Welcome to summer!

An active weather pattern is setting up over the southern Prairies this week, with locally severe thunderstorms likely over southern Alberta and southern Saskatchewan again later today into tonight. The remnants of that convective activity will spill into southwest Manitoba Thursday, with showers and thunderstorms expected to re-develop over southern MB including the Red River valley later Thursday into Thursday night. Some of these thunderstorms may be strong with heavy rain and frequent lightning, with the potential for some locally severe storms giving large hail and strong wind gusts. This activity is expected to push through southern MB by Friday morning, with additional thunderstorms possible later Friday especially over southeast MB and near the US border.

UPDATE: A nearly stationary thunderstorm cell over southwestern parts of the city dumped torrential rain Thursday evening, with amounts of 50 to 75 mm reported within 2 hours. The heavy rains caused flash flooding on some major routes in Tuxedo and Charleswood and even flooded IKEA and Superstore buildings. See "A Weather Moment" for additional details on this event. 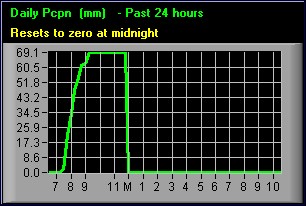 At my station in Charleswood, I picked up 69 mm of rain between 720 and 920 pm. (see rain accumulation graph left)  Heaviest rain was between 720 and 820 pm when 50 mm fell within one hour, with a peak rainfall intensity of 293 mm/hr at 7:39 pm according to my Davis Vantage Pro weather station. See City of Winnipeg rainfall map that shows the localized nature of this extreme rainfall.

More unsettled weather Monday then a drier, warmer week ahead..

Showers and scattered thunderstorms moved across southern Manitoba today as a trough of low pressure from Saskatchewan pushed across the region. This activity is expected to taper off this evening, however another batch of showers and thunderstorms over southern Saskatchewan is forecast to spread into southwest MB overnight into early Monday, pushing into the Interlake regions during the day Monday. Locally heavy downpours are possible with this next wave of precipitation with 10-20 mm possible in some areas. The bulk of the activity is expected mainly west and north of Winnipeg, but the city could also see some showers Monday morning through early afternoon along with a chance of a thunderstorm.

Once that system clears out Monday evening, the rest of the week is looking great.. with generally sunny skies and warm temperatures in the mid to upper 20s through at least Thursday and possibly into Friday before the next threat of showers by the end of the week. Slowly but surely.. it's beginning to feel a little more summer-like in southern Manitoba.
Posted by rob at 4:53 PM 52 comments:

After a soggy end to May, a ridge of high pressure will bring clearing skies and drier weather this weekend over southern Manitoba to start off the month of June. Temperatures however will be below normal, with daytime highs only in the mid teens today and Sunday, some 7C below normal for this time of year. As the ridge builds in over southern Manitoba tonight, clear skies and diminishing winds will give ideal conditions for areas of frost overnight across much of southern Manitoba including Winnipeg. Temperatures will be dropping to the 0 to +2C mark tonight, with a good risk of frost overnight into early Sunday in many areas. Sunny skies and light winds will make for more pleasant conditions Sunday, as afternoon temperatures climb to the 16C mark. Dry weather is expected into early next week before another disturbance brings a threat of more rain by mid week.
Posted by rob at 5:56 AM 47 comments: