December to finish colder and snowier than normal..

December 2012 will finish colder and snowier than normal in Winnipeg, capping off what had been a record warm year through the fall.  December will finish with an average monthly temperature of -14.7C at YWG airport, or about 1.2C colder than the normal* December average of -13.5C (1981-2010 normal - see note at bottom of post)  Two cold spells around the 7th-13th and over the Christmas holidays brought the monthly average below normal, the third straight month with below normal temperatures. December snowfall of 32 cm (as measured at my site) was above the December mean of 19.8 cm, and brought the seasonal snowfall total so far up to 75 cm in the city.. almost matching last winter's entire snowfall total (80 cm) Normal seasonal snowfall in Winnipeg is around 110 cm.

For the year, 2012 will end up with an annual average of +4.6C in Winnipeg, some 1.7C above normal* and the 5th warmest calendar year on record since complete records began in 1873.  2012 was on pace to be the warmest calendar year through October, but a colder than normal finish dropped the year down to 5th place honours. 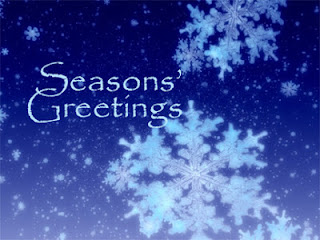 Here's wishing everyone a safe and happy holiday season, and a wonderful new year in 2013!

2012 was sure an interesting year weatherwise over southern Manitoba and much of North America, with an exceptionally mild winter to start, record March heat wave, warmest 12 month period on record, and a snowy end.  Let's see what surprises Mother Nature has in store for 2013! Happy holidays!
Posted by rob at 5:29 PM 23 comments:

Generally quiet weather is expected over southern Manitoba over the next few days and through the Christmas holidays with no major storms forecast over the next little while.  Stubborn clouds and occasional light snow has persisted for the past few days, and will linger into Friday before some breaks appear over the weekend into early next week. Occasional light snow is possible at times, especially by Christmas Eve, but significant snow accumulations are not expected. Temperatures will be seasonably cold with highs in the minus teens, and lows in the minus 20s if skies clear. This will be good news for holiday travellers, with no major problems expected for highway or air travel heading into Christmas.
Posted by rob at 4:25 PM 24 comments:

Another round of snow moving in for Wednesday morning commute..


Another clipper system developing over the western Prairies is forecast to spread an area of snow over southern Manitoba tonight into Wednesday. Snow is expected to spread into southwest Manitoba this evening reaching Winnipeg and the RRV around midnight or shortly after. Snow will increase in intensity overnight with 2-5 cm possible by the morning rush hour.  Plan on extra time for your morning commute as roads will be snow-covered and slippery. Snow will be tapering off by midday Wednesday with total amounts of 4-8 cm possible for Winnipeg, and 10 cm or more possible mainly south of the city.
Posted by rob at 12:43 PM 88 comments:

Snow is spreading into the Red River Valley this morning including Winnipeg as a weak system passes across southern Manitoba. About 5 cm of snow is expected in Winnipeg by the afternoon with higher amounts of 10 cm possible mainly south of the city. As the system clears tonight cold weather will move into southern Manitoba with temperatures into the minus 20s for overnight and Sunday into the first part of the work week.
Posted by rob at 7:42 AM 40 comments:

A fast moving jet stream across southern Canada will be resulting in a variable weather pattern this week over southern Manitoba, with frequent swings in temperatures as weather systems sweep across the Prairies. In the short term, a storm system over northern Montana this afternoon will track into the Manitoba interlake regions overnight into Monday, bringing a swath of heavy snow across central Manitoba. Southerly winds ahead of the system will draw up milder air over southern MB, with temperature rising above freezing over the south, including Winnipeg and the RRV. As the storm system tracks into the interlake overnight into Monday morning, some rain is likely over the south while a band of freezing rain is possible over the western Parklands and southern interlake regions.  Monday will start off mild and wet over the RRV, however a cold front from the storm system to the north will sweep across the RRV, bringing a return to colder temperatures. In Winnipeg, temperatures near +1C at 9 am are expected to fall to -5C by 3 pm, along with gusty NW winds and a chance of flurries. Colder but seasonal temperatures are forecast for Tuesday before another warmup by Wednesday. Long range models are forecasting a potential for some snow by next weekend with colder temperatures to follow in its wake.

Radar notes: Note that radar images from the Weatheroffice website are now on SNOW rate and will overdo precipitation intensities during rainfall events. Consult Brad's radar viewer from A Weather Moment for radar images showing more accurate RAIN rate intensities during rain or freezing rain events in the winter (select 1.5 km CAPPI for RAIN rate) Weatheroffice radar images are fixed on snow rate across the country until spring.
Posted by rob at 12:59 PM 94 comments: