12.6 cm storm total here in Charleswood..  12 cm on the ground. Looks like our whitest Halloween here in a number of years.

Snow has moved into southwest MB this morning with visibilities down to 1.5 miles in snow in Brandon as of 7 am. Radar indicates heavier snow down in the Melita and Boissevain areas with visibilities likely below 1 mile. The snow should continue to spread eastward this morning reaching Portage by 8 or 9 am and then Winnipeg by late morning. Snow will increase in intensity through the afternoon in Winnipeg with about 5 cm likely by late afternoon so plan for a slow drive home after work today. I expect the heaviest snow between 3 pm and midnight in Winnipeg with total snowfalls of about 10 to 15 cm. Winds will also be increasing this afternoon into this evening from the northwest which will cause poor visibilities in snow and blowing snow, especially in open areas this evening and tonight.
Posted by rob at 7:31 AM 5 comments:

Oh oh.. looks like Winnipeg and Southern Mb may be looking at a white Halloween as a storm system from Montana moves over the Dakotas on Monday bringing the potential for accumulating snow Monday into Monday night across the area. Models are indicating that this storm system will intensify over North Dakota on Monday, bringing a swath of snow from southwest MB through the Red River valley and southern Interlake regions. At this point, it appears that 10 to 15 cm of snow is possible over Southern MB, with up to 20 cm over higher elevations of southwest MB such as the Turtle Mtns and Pilot Mound areas. This same storm system is producing snow across southern Alberta today including Calgary (check out the Calgary webcam today to see what we may be in for tomorrow!)

Snow from this system should start falling over southwest MB overnight into Monday morning, spreading into Winnipeg by midday Monday or early afternoon. Snow will quickly increase in intensity through the afternoon into the evening with 10 cm possible by midnight. The snow will likely begin as wet melting snow in Winnipeg initially as temperatures will be above zero by the time the snow starts, but will drop to the freezing mark as the snow intensifies. The Monday afternoon rush hour could be a sloppy slow one if this pans out. The storm should clear out by Tuesday morning, but it’s not likely that the snow will melt in time for Halloween trick or treating Tuesday evening. Get the boots ready!
Posted by rob at 8:52 AM 4 comments:

Continuing cool through end of October

Strong winds this afternoon into Friday

It's going to be a windy one in Southern Manitoba over the next 24 hours as a deep low pressure system over Northwest Ontario funnels cold northwesterly winds over Manitoba.  Winds are already 48 gusting 63 km/h at Winnipeg airport as of noon, and the winds are only expected to become stronger by this evening. It's possible Winnipeg and the Red River valley may experience wind warning criteria with sustained wind speeds of 60 km/h or more by this evening through tonight into Friday with gusts to 70 or 80 km/h.  Not a pleasant way to the end the week! The good news is the weekend should see much calmer conditions as a ridge of high pressure builds into the province bringing light winds.   Unfortunately it looks like we'll be staying well below normal temperature-wise through next week. After such a beautiful stretch of above normal weather dating back to April, I guess it's payback time for Mother Nature! 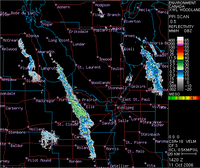 Snowsqualls have developed off Lake Manitoba and Lake Winnipeg as expected as the season's first cold snap brings in unseasonably cold air over the still warm lake waters. The lake effect bands are narrow..about 10-20 km wide.. but are likely producing local whiteout conditions underneath the bands. Both bands are oriented in a 330 direction with the Lake Manitoba band coming in between Delta Beach and St Ambroise then southeastward through Oakville to just east of Elm Creek then east of Carman. Travellers heading west from Winnipeg will run into this line on the TransCanada between Poratge La Prairie and Elie (near Hwy 13 junction), as well as on Hwy 2 between Elm Creek and Fannystelle, and Hwy 3 between Brunkild and Carman. The Lake Winnipeg band is affecting the southeast end of Lake Winnipeg including Victoria Beach to Grand Beach southeastward through Brokenhead to just east of Beausejour. These bands should stay relatively stationary which could produce local snowfalls of 20 cm or more under the more persistent bands.
Posted by rob at 9:21 AM 2 comments:

It's snowing in Winnipeg!

Well, the first snow of the season is falling in Winnipeg. A cold rain started around 1:30 pm then changed to snow over the north part of the city by 2:45 pm. By 3 pm, the rain had changed to wet snow over much of the city with visibilities reduced to 1 km or less at times.  Here in Charleswood, the wet snow began at 3:09 pm.  The wet snow should end by late afternoon with 1 or 2 cm of slushy accumulation likely over grassy surfaces.

The first significant lake effect event of the season will likely begin tonight as a very cold airmass sweeps over Southern Manitoba, including Lakes Manitoba and Winnipeg. The cold air moving over the 10-11C lake waters will trigger bands of lake effect snow to the south and southeast of Lakes Winnipeg and Manitoba. Guidance is indicating winds of 330-340 degrees in the lowest levels with 850 temperatures of -10C to -12C. This will create very strong instability over the lakes with a lake-850 temperature differential of 20C or more. Generally, lake effect will trigger with a differential of 13C or more. The squalls will likely get going this evening initially as lake effect rainbands and then intensify overnight into snowsqualls as the colder air deepens over the lakes. 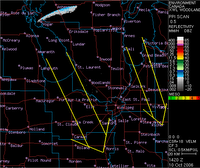 Given 330-340 degree low level steering winds, the lake effect bands will likely set up off the south end of Lake Manitoba through Elie and Fannystelle towards Brunkild. Off Lake Winnipeg, the bands will likely set up over Grand and Patricia Beaches south-southeast towards Beausejour and Vivian. (see map) These lake effect bands could be quite intense if they change into snow as expected. Near zero visibility in heavy wet snow are likely through these bands overnight through Wednesday with local accumulations of 5-10 cm per 12 hours possible. Accumulations will be less if the precipitation is mixed with rain which may be the case close to the lakes where the 11c lake water will warm the low levels enough to maintain precipitation as rain.

Whatever the case, looks like an interesting couple of days shaping up as Mother Nature sends us an early taste of winter!
Posted by rob at 10:25 AM 1 comment:

Yuck.. The coldest weather of the fall season so far will be blasting into Southern Manitoba on Tuesday as a sharp cold front moves through from the northwest during the day.  Southwest winds in the morning will shift into the northwest by afternoon, which will usher in much colder air from Northern Manitoba. Temperatures will be falling into the low single digits Tuesday afternoon with rainshowers changing to the season's first snowflurries by late afternoon or evening. There could even be some significant lake effect rain or snow bands off the south ends of Lake Winnipeg and Manitoba Tuesday night and Wednesday. The cold weather will persist through the week with cold winds and occasional flurries, a sharp change from the pleasant fall weather enjoyed up to now.  Hey, it had to come sooner or later! (although I prefer later..:)

What a difference a year makes!

It will be another beautiful fall day over Southern Manitoba on Thursday as sunny skies and southerly breezes push temperatures close to the 20 degree mark.  This is in sharp contrast to a year ago when Southern Manitoba was hit by the season's first snowstorm on October 5th that brought 5 to 10 cm of wet snow to Winnipeg and up to 45 cm over southwest Manitoba near Pilot Mound. (see write-up at.. http://members.shaw.ca/wpgwx/robsobs/highlights05.htm)  No snow is in the forecast this year as the mild weather is expected to continue into Saturday before a cold front brings in cooler conditions for the remainder of the holiday weekend, but no snow.  Milder conditions are expected to move into Southern Manitoba again next week.

..Warm and dry first half.. seasonable second half..

The dryness that characterized the summer of 2006 continued into the first half of September with no rain recorded for the first 15 days of the month. The dryness was also accompanied by some summerlike heat at times with temperatures near or above 30 degrees on several days, peaking at 31C on the 15th. Rain finally arrived on the weekend of Sept 16-17 with 25 to 45 mm of much needed rain in the area. The rest of the month was generally characterized by seasonably pleasant fall like weather with temperatures in the teens and some minor rainfalls. The growing season officially ended on the 8th at Winnipeg airport with a low of -1.3C although at my location in Charleswood the growing season didn’t end until the 28th with a low of -2.1C Overall, the month ended about a degree and a half above normal at 13.8C (normal 12.3C), the 7th consecutive month with above normal temperatures at my location. Precipitation wise, the month was again drier than normal with only 38 mm of rain during September at my location (43 mm at airport) compared to the normal September rainfall of 53 mm. September marks the 6th consecutive month of below normal precipitation in Winnipeg, with a precipitation deficit of 205 mm since April 1st at my location, a growing concern for agricultural interests especially if the upcoming winter snowfall is lower than normal.

Another fine fall day in .. beautiful blue skies, light winds and temperatures near 20C by early afternoon.  EC’s forecast today “Becoming cloudy with highs of 18C”  is a bit pessimistic given the abundance of sunshine over and temperatures already at 18C as of noon.  Sunny with cloudy periods and highs of 20C would be a better forecast for today..

Wow.. What a beautiful start to October! Under sunny skies and a nice southwest breeze, temperatures rose to a balmy 26.8C at my Charleswood station today, (26C at Winnipeg airport)... some 12C above normal for October 1st. Felt just like summer out there. Shorts and bike rides were the norm today. It was even warmer south of Winnipeg, with Morden hitting 29C today - the hottest spot in Canada! Should be nice again tomorrow, although not quite as warm.. with highs around 18-20C. Still nice for early October.