Temperature anomaly map (left) for November 2015 shows core of abnormal warmth centered over northern Minnesota and southern MB in November. Only 4 days of the month were below normal in Winnipeg (right) 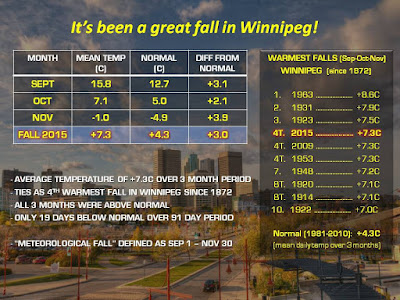 90 day graph of temperatures (right) in Winnipeg over the Sep-Nov period 2015. All 3 months were above normal, with only 19 days below normal over the 3 month period.

Milder than normal weather is expected to continue through at least the first half of December, thanks to a very strong El Nino this year. The next week looks especially mild, with an extended flow of Pacific air that will keep temperatures about 10-15C above normal into next week. Temperatures will be at or above the freezing mark over much of southern Manitoba over the next few days, especially in snowfree areas such as the Pembina valley (Morden, Winkler), SW Manitoba (Melita), downslope areas east of the Riding Mtns  (Dauphin, McCreary) and forested areas (Whiteshell)  In these areas temperatures may reach +5 to +10 C by the weekend.  Long range models are hinting at colder weather (near normal) arriving the weekend of Dec 12-13th, but it's too early to say if that's a trend to colder weather for the second half of December, or a passing cold snap. Past El Nino years suggest that cold snaps are usually short lived and not as intense as the upper pattern rebounds to bring a return of milder Pacific air over the country.  In fact, when looking at past strong El Nino years, there's a very high probability that December will end up warmer than normal in southern MB (as well as much of the northern and eastern US). The image below is a composite of average December temperature anomalies of 6 strong El Nino years since 1950 (1997, 1991, 1982, 1972, 1965, 1957)  Of these years, only one December was colder than normal in the Prairies (1972)  The top 2 warmest Decembers on record in Winnipeg occurred during strong El Nino events (1877 and 1997)