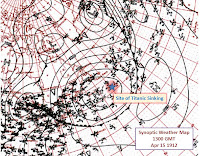 in time for the speedy Titanic to avoid a collision at 11:40 pm April 14th 1912. Within 3 hours, the doomed ship had sunk to the bottom of the Atlantic, taking 1500 lives with her. The clear moonless night, together with a flat calm sea that prevented waves from breaking at the base of the iceberg (which would have made it easier to spot the ice a further distance away) gave Titanic's lookouts minimal time to spot a looming iceberg ahead. Had there been a moon that night, or a wind that would have created some waves to make the ice easier to spot ahead of time, the lookouts may have had more time to warn the Titanic's officers about the ice ahead, providing a greater chance to avoid a collision. But it wasn't meant to be.. all the factors came together that night, including the weather, to lead to the most famous and dramatic maritime disaster in modern history. (For more information on the conditions that fateful night 100 years ago, see the current Weatherwise article "Retrospect: Sinking of Titanic")
Posted by rob at 8:44 AM