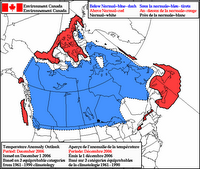 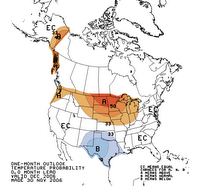 Quite the opposing views on what kind of December we'll have according to the latest 30 day outlooks from Canada (EC) and the US (CPC). According to EC, temperatures across Manitoba, and much of Canada, are forecast to be below normal this December (top image) In contrast, CPC is forecasting a better than even chance of above normal temperatures this December over the eastern Prairies(bottom image)

Who's right? Maybe neither.. It could end up somewhere in between. Correlations with past weak El Nino years suggest that December and January are generally milder than normal here in Manitoba.. but that's not always the case. So I guess we'll just have to wait and see.. and cross our fingers that the Americans are right!
Posted by rob at 12:35 PM