Dry and pleasant for Halloween

After a stormy mid week and a dusting of snow last night, Mother Nature will be giving southern Manitoba a treat for Halloween with some dry and pleasant weather Sunday evening. Cloudy skies and fog patches overnight will give way to sunshine Sunday along with seasonable afternoon temperatures near +5C. By evening, trick or treaters can expect temperatures around +2C with a light southerly breeze of 15-20 km/h under clear skies. This will lead into a very nice start to November with sunny skies and high temperatures near 10C for Monday. A cold front will push through late Tuesday bringing in cooler temperatures for the middle to end of the week, but dry conditions. Overall, it's looking like a nice start to November.
Posted by rob at 3:53 PM 2 comments: 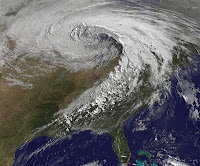 The powerful storm system that has been affecting the eastern Prairies has set new records for all time lowest barometric pressure readings for this part of the world. Yesterday's storm bottomed out at 955.2 mb (28.21") at Bigfork Minnesota, in the northern part of the state, late yesterday afternoon. This is the lowest pressure reading of all time in Minnesota, eclipsing the previous record of 963 mb in Nov 1998. (see NWS Duluth storm summary on this event) It is also the second lowest barometric reading ever recorded in the contiguous US, second only to a 955.0 mb (28.20") reading in Canton NY (Jan 1913) and Nantucket MA (Mar 1932) (There is a report of a 952 mb (28.10") reading during a noreaster on Long Island in March 1914, but this is not in official NCDC records. For more info, see storm system in historical perspective)

In Winnipeg, the barometer fell to 967 mb, the lowest pressure on record at Winnipeg airport since official pressure readings began in 1953 (previous lowest pressure was 974 mb on Nov 20 1962) (see barometer trace from my site as it bottomed out at 966 mb at 4:44 pm) The lowest pressure in the province yesterday was recorded in Sprague at 960 mb, closer to the low center as it tracked over Fort Frances, Ontario at 957 mb. The storm brought strong winds, rain, and snow over a large part of central North America, and at least two dozen tornadoes over the Ohio Valley. In southern Manitoba, the storm produced heavy rain through the Red River valley and Interlake regions (50-90 mm), as well as the season's first snowfall over western Manitoba, mainly over the higher elevations of Riding and Turtle Mountains where 15-30 cm of snow was reported. In addition, northerly winds gusting to 95 km/h generated large waves and high water levels on the Manitoba lakes producing severe local flooding in some near shore communities including Winnipegosis, Gimli and Winnipeg Beach. The strong winds also led to beach erosion and wind damage on the southeastern shore of Lake Winnipeg including at Victoria Beach and Grand Beach. Lakeside residents are calling the storm the worst they've seen in at least 40 years..
Posted by rob at 10:58 AM 72 comments:

An intense storm system over northern Minnesota is bringing powerful winds, heavy rain and snow over a wide swath of the Northern Plains and eastern Prairies.. the first significant storm of the fall season. After a quiet storm free month, Mother Nature is making up for it with a record setting storm system to close out October. The storm is setting records for the lowest barometric pressure on record for a storm in the Northern Plains (962 mb), and may possibly approach the all time lowest pressure for a non tropical storm in the US (currently at 955 mb)

This storm has brought significant rain over southern MB with at least 25 to 40 mm across the Red River valley, with more expected tonight into Wednesday before it mixes with or changes to snow during the day. Further west, a snowfall warning is in effect for western MB from Swan River to Pilot Mound for 10 to 25 cm of snow tonight into Wednesday.

This will be the season's first major blast of winter weather over Southern Manitoba so residents planning on travel through Western Manitoba tonight or Wednesday should be prepared for hazardous winter travel conditions including the Yellowhead and Transcanada highways west of Portage. Precipitation from this system is expected to stay mainly as rain over the Red River Valley and Southeast Manitoba, however the rain is expected to change to wet snow during the day Wednesday with some slushy accumulations possible by evening. In addition strong northerly winds are expected to develop across Southern Manitoba later today into tonight with gusts to 80 km/h likely over the Red River Valley by Wednesday. Local gusts of 90 to 100 km/h are possible along the southern shores of Lake Manitoba and Lake Winnipeg where northerly winds blow off the open water. Gale warnings are in effect for those lakes with large waves likely tonight and Wednesday with local beach erosion possible. All in all, a powerful storm to take us into the winter season!
Posted by rob at 1:05 PM 16 comments:

After 4 weeks of mild dry weather over southern Manitoba with virtually no precipitation over that time, it looks like a major pattern change is in store over the Prairies for the last week of October. A strong storm system over the Pacific will be pushing across the Prairies early next week, and will bring rain, strong winds and even the season's first snowfall over parts of southern Manitoba by the middle of next week. Rain ahead of the system is expected to push into the Red River valley Monday afternoon or evening then continue into Tuesday. By Tuesday evening into Wednesday, the storm system is forecast to intensify over northern Minnesota into NW Ontario, bringing strong northerly winds and colder air into southern Manitoba. Temperatures will fall into the low single digits by Wednesday, with rain changing to wet snow over parts of southern Manitoba, especially over higher elevations west of the Red River valley. The colder air will bring an end to the mild weather that has produced double digit highs every day so far this month. Below normal temperatures are expected for the latter part of the week before returning to seasonal values for Halloween weekend.

This storm system will bring the first significant precipitation over the Red River valley in over 4 weeks. Overall precipitation amounts from this system will vary between 10 to 50 mm, with a 50% chance of seeing at least 25 mm of precipitation in Winnipeg between Monday and Thursday. It's too early to say whether we'll be seeing our first snowfall of the season in Winnipeg by Wednesday, but it's likely that the higher elevations of western MB including the Turtle Mountain and Riding Mountain areas will be seeing some accumulating snow from this storm system. Stay tuned..
Posted by rob at 7:25 AM 35 comments:

The dry weather we've enjoyed for the past 3 weeks will continue this week, with an upper ridge blocking any large weather systems from affecting southern Manitoba. After an exceptionally wet late summer, the taps were finally shut off in late September with only 2.0 mm of rain recorded in Winnipeg in the past 3 weeks (since September 25th) Long range models are indicating a breakdown in the upper ridge by early next week, resulting in cooler and more unsettled conditions moving into southern MB for the last week of October.
Posted by rob at 10:20 AM 17 comments:

The beautiful Indian summer weather of the past week will continue through the upcoming Thanksgiving weekend, with afternoon temperatures in the low to mid 20s through Monday.. some 10-15 degrees above normal for this time of year. That will give Winnipeg 8 straight days of temperatures in the 20s so far this month, doubling the number of 20C days we had all of September. The summerlike weekend this year is in sharp contrast to last year's Thanksgiving weekend weather which was marked by an early snowfall over southern Manitoba, including 10 cm in Winnipeg and a whopping 50 cm of lake effect snow near Lac Du Bonnet.
Posted by rob at 9:51 AM 10 comments:

October is starting off in fine form with plenty of sunshine and above normal temperatures this week. Temperatures are expected to be at or above the 20C mark through Friday, and possibly though next weekend with no significant rainfall through the period. Winnipeg hit the 20C mark only 4 times in September, and it looks like that number for October may be surpassed by the end of the week! Long range models are indicating the current weather pattern is expected to persist into early next week before a shift towards cooler temperatures and possible showers by the middle of next week. Until then.. enjoy our belated September weather!
Posted by rob at 10:02 PM 12 comments:

It was another wetter than normal month in Winnipeg and across much of southern MB and the Prairies in September, finishing off one of the wettest growing seasons on record across the Prairies. In Winnipeg, September rainfall totalled 93.0 mm at YWG airport, almost twice the normal September rainfall of 52 mm. This pushed this season's total precipitation since April 1st to 582.5 mm, 154% of "normal" (30 yr average = 378 mm) making it the second wettest April to September period in Winnipeg since records began in 1873. The all time wettest April-September period in Winnipeg was in 1977 when 594.3 mm of precipitation was recorded, about 12 mm more than this year. This year's high total was mainly due to several heavy rainstorms of 50-100 mm that occurred over the Red River valley in late May as well as August and September. Even heavier amounts of rain were recorded over southern and eastern parts of Winnipeg during the past 5 months, including September with 100-120 mm of rainfall reported in some areas of the city. At my site in Charleswood, seasonal rainfall from April 1st - September 30th totalled 685 mm, over 100 mm more than the airport site. Further south, Morris reported 642.6 mm from April 1st-Sept 30th. The wet weather has made it a challenge for area farmers, especially with some of the heavy downpours occurring late in the growing season resulting in a delayed harvest for many. Fortunately, sunny dry weather at the end of the September has salvaged hopes for a more complete harvest in southern MB before colder weather sets in.

The wet weather this year has not only been a problem in southern MB, but throughout the prairies with one of the wettest growing seasons on record from Alberta to the Ontario border. The situation is especially bad in central Saskatchewan where record wet weather and an early killing freeze has severely limited agricultural output this year, resulting in major financial losses.